The Georgetown Mayor and City Council (M&CC) has received a new $45M garbage truck, which will boost the municipality’s continued effort in relieving the capital city of solid waste.

The white 28ft machine – bearing number plate GXX 9765, forms part of an ongoing support programme by the Central Government to all municipalities throughout Guyana. 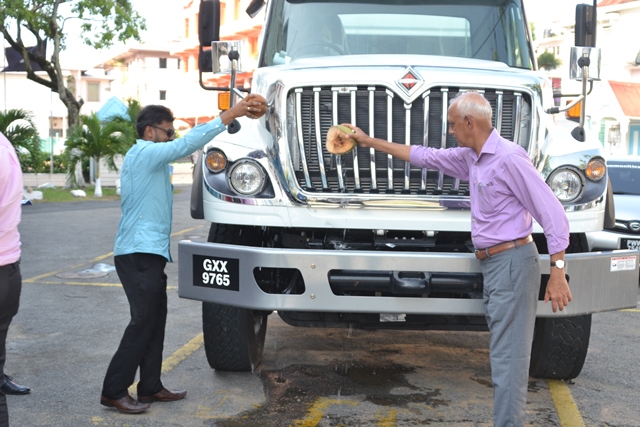 Minister of Communities, Hon. Ronald Bulkan and His Worship the Mayor of Georgetown, Pandit Ubraj Narine blessed the new machine. 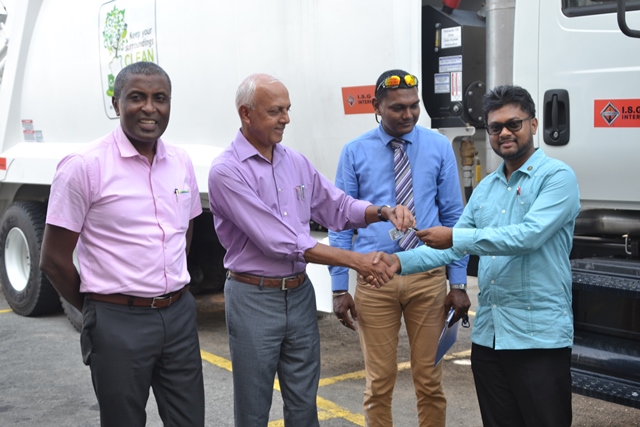 Minister of Communities, Hon. Ronald Bulkan hands over the keys to the new garbage truck to His Worship the Mayor of Georgetown, Pandit Ubraj Narine. 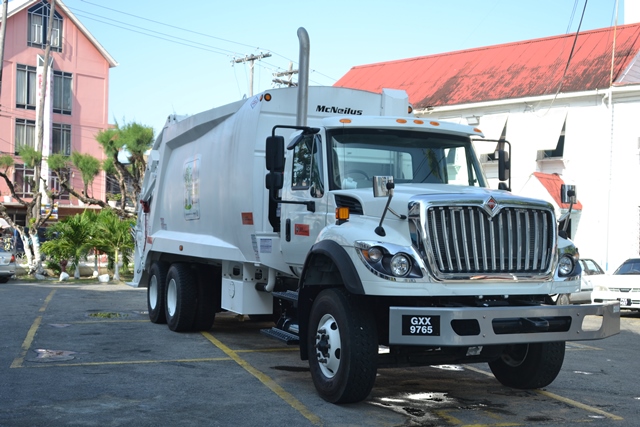 “Earlier in the life of this administration, a few other compacted trucks were provided to the council. We are very aware of the enormous challenges that the council is faced with as far as its revenue based is concern, and that in the absence of realistic valuations and revaluation of properties in the city that your revenue based is compromised and challenged, and it is for this reason that the Central Government is forced in the interim to step in and to provide much critical support by way of this equipment and other forms of assistance,” Minister of Communities, Hon. Ronald Bulkan remarked, during the official handing over ceremony, in the compound of the M&CC, on Thursday afternoon.

Receiving the keys to the garbage truck was His Worship the Mayor of Georgetown, Pandit Ubraj Narine. Minister Bulkan urged the mayor and his team to ensure that proper systems and safeguards are established for qualified operators and maintenance.

“We have already supplied tractors and skip lift trailers as well as skip bins to each of our other nine municipalities. Currently, a further ten trailers are in the process of being acquired for delivery. This again represents our ongoing support by the central government to our local government organs,” he reiterated.

The Communities Minister further pointed out that, “this administration believes in empowering our local communities and we recognised that given the extended neglect that was paid to local government organs, that in this period of transition and rebuilding that we are in, it requires an extra support on the part of central government,” he added.

City Mayor, Narine welcomed the gift and assured that the garbage truck will be used to improve the lives of residents. “I am grateful to the Ministry of Communities and central government for this wonderful machine, which will be of great benefit not for the City Council, but most importantly the citizenry of Georgetown.”