(June 18, 2018) – Today, at the University of Guyana’s ‘Consultation on Enhancing Language Programmes’, Minister of Education, Hon. Nicolette Henry said that there is a need for a paradigm shift around language learning in Guyana.

Delivering the opening remarks in the Education Lecture Theatre on the Turkeyen Campus, Minister Henry said that the University is well positioned to begin taking steps for that shift to take place. She said that this is a significant opportunity for Guyana to excel on the global stage. 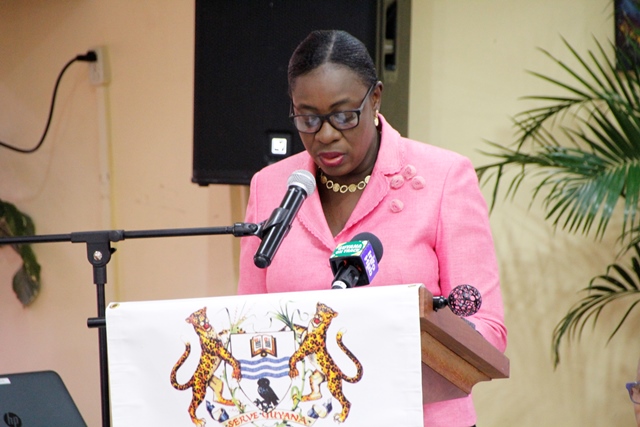 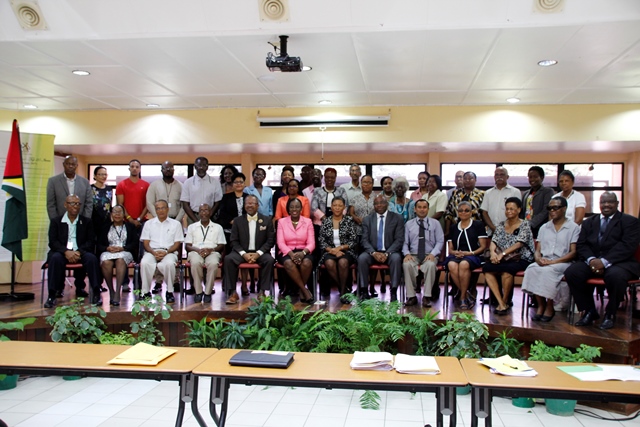 Participants of the consultation exercise pose for a photo-opportunity with the Minister of Education, Hon. Nicolette Henry (seated eighth from right) and Vice-Chancellor of UG, Professor Ivelaw Griffith, (seated fifth from left). 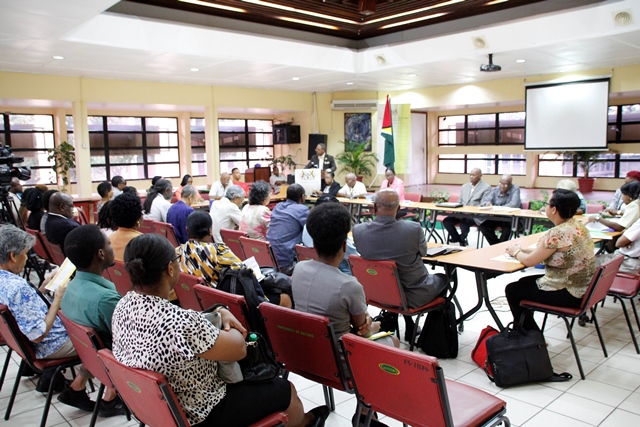 She said, “I believe that enhancing and developing the language programme at the University of Guyana with the introduction of four new languages is a commendable initiative and one that can add value to doing business on the global scale as the ability to communicate in more than one language is often considered a competitive advantage when hiring new employees.”

Further, Minister Henry shared the view that enhancing and developing the Language Programme at the University will assist in supporting teachers pursuing foreign languages.

Minister Henry added that the Government of Guyana is fully committed to restoring languages to their rightful place in the school curriculum to ensure that more children are able to access a high quality of learning.

“I trust that when this programme is launched, teachers will be a main target group, because we want our children to become familiar with bilingualism from an early age,” Minister Henry said.

According to the Education Minister, “Working together, we will heighten awareness of the importance of learning foreign languages and will motivate more of our learners to embrace this opportunity with enthusiasm and enjoyment.”

Minister Henry said to the gathering of stakeholders that she is encouraged to see the University of Guyana taking the initiative with the consultation to revitalise Foreign Language programmes in Guyana. She said that education is central to the ambitions of a nation as it supports the development of a strong, growing economy, while also promoting a multicultural and inclusive society.

Moreover, the Education Minister said that language studies form a unique addition to a student’s university education with the variety of teaching and learning techniques adding variety, balance, or counter-balance to the education process.

She said that the education system must support learners of all ages to gain the skills and confidence to be global citizens, to understand other cultures and societies, as well as to develop the skills to function and thrive in the modern global economy.

Vice-Chancellor of the University of Guyana, Professor Ivelaw Griffith said that if persons are to limit themselves linguistically, they will be limiting their world and the extent of their engagements and networking. He said, “We limit ourselves, if we limit ourselves to English.”

According to the Vice-Chancellor, the consultation is a journey that is part of a broader project called the “UG Renaissance” which is seeking to transform the University and bring it into the 21st Century.

Dean of the Faculty of Education and Humanities, Ms. Claudette-Austin, said that the purpose and objectives of the consultation is to address the following issues: