Despite breaches, previous gov’t had agreed to pay BK in excess of $256M – AG

Attorney General and Minister of Legal Affairs, Basil Williams said that the settlement reached with BK Construction Company (BK) for the management of the Haags Bosch sanitary landfill site is in keeping with a decision of the previous government, to pay despite several breaches by BK. 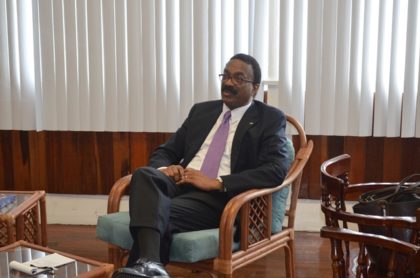 Minister Williams said when he took office there was a case filed by BK Construction,  a Prerogative Writ which was dealt with by the last Chief Justice, Ian Chang. “… when he gave his judgment, he said that BK must remain on the site, but that was in the context in which the Inter-American Development Bank (IDB) wanted BK off the site, a context in which smoke and fires were emanating from the site and having a deleterious effect on neighbouring communities, and it was also in light of the fact that they needed a new contractor on the site to continue the contract. Those were the considerations involved,” the Legal Affairs Minister explained

Further, Minister Williams said that despite committing several breaches in the performance contract in managing the Haags Bosch sanitary landfill site, BK Construction Company was still allowed to remain on site and submitted invoices for payment to the previous administration.

“There were several breaches by BK, but they were waived by the previous government. When you breach a contract and the other side does not act on the breach by taking legal action or whatever procedures there might be under the contract, it means that you would have waived the breach, and that is what they did. On the other hand BK continued performing and was submitting invoices to them which they acknowledged were due owing and payable to him, so that’s what we inherited,” the Attorney General explained.

According to the Minister of Legal Affairs when he took office after the May 2015 National and Regional Elections it became known that the previous administration had already entered into an agreement to pay BK in excess of $256M based on invoices submitted.

“They didn’t know they were going to lose the election and so they had agreed to pay BK more than US$10M. Some of the vouchers are there at the ministry. I said I’m not paying any money unless I interrogate the contract which I did.”

However, the Minister assured that government will endeavor to honour all judgments, inherited or otherwise.

“The previous government had created so many maladies in our whole financial system and one aspect of that is in relation to judicial judgments. Large sums (in judgments) were incurred under the previous administration and they never paid them. We are saddled and are burdened with them. What are they going to tell us? Not to honour the debts of the government?  We’re not like them so we will honour all judgments that we inherited, and all judgments that might arise under us, that’s the way of a democratic system,” the Attorney General told the Government Information Agency (GINA) in an interview today.

The Haags Bosch Sanitary landfill site was funded by the IDB and managed by BK Construction Company until 2015 when the bank became concerned about nonperformance and requested that the contract with BK be terminated.