The Central Corentyne Chamber of Commerce last evening official kicked off the Berbice Expo and Trade Fair at the Albion Sports Complex, Corentyne under the theme “Promoting entrepreneurship for a diversified economy”. This year marks twelve years since the expo has been in existence and saw participation by corporate Guyana, several Government Ministries and small business operators. Given the current world trends where countries are being forced to adopt to economic and climatic changes to thrive, the theme which embodies the need to diversify and develop entrepreneurial skill was well suited and mirrored in the remarks of the various speakers. 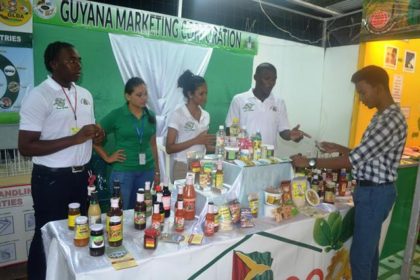 GMC booth at the Berbice Expo

The Exposition is the single largest event in the region and allows for both large and small businesses to gain from sales and promotions.

During his opening remarks, Secretary of the Central Corentyne Chamber of Commerce, Mr. Poonai Bhigroog, expressed his satisfaction and gratification with the Chamber’s efforts in successfully organizing another such event.

“I am happy to see that the Chamber of Commerce has recognised the need to promote entrepreneurship and diversification.” Mr. Bhigroog said. 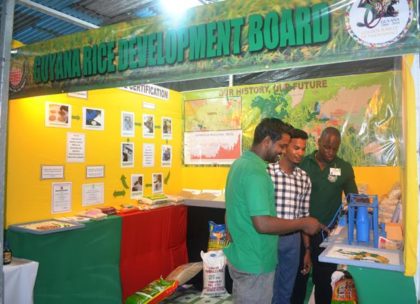 Bhigroog made a call on Guyanese to seek new avenues by diversificating their produce when dealing with the rice and the sugar industries. “We have to explore new ways to keep rice and sugar alive.” he added.

Many business operate in fishing, etc., but the major strength lies in agriculture. Appeals were also made for persons to practice Climate Smart agriculture. Guyana has the potential to supply fruits and vegetables to its sister CARICOM countries on a large scale basis and the Ministry of Agriculture through the Guyana Marketing Corporation has been working tirelessly with farmers to ensure that the best possible markets are tapped into. This, however, can only be achieved through smart and planned agricultural practices. 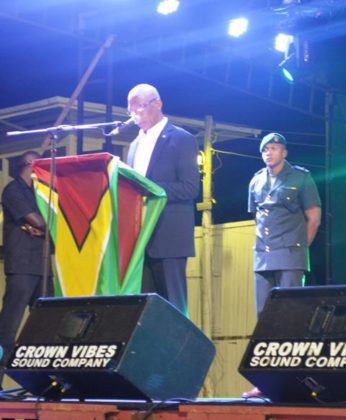 H.E. David Granger while delivering the feature address at the opening of the Berbice Expo

During his feature address, President David Granger appealed to the Corentyne as a whole to change so that the Corentyne can be better. “This is a vast region. You have the potential to give your residents the good life. You are gifted with a strong production base and an abundance of talent.” President Granger said.

The president also urged the residents to adopt new avenues and diversify the market in order to stimulate growth in the economy. “You have to change because even if you are depending on rice and sugar and you are getting good prices for a year, you can almost guarantee that you will get unsatisfactory prices another year due to fluxuating world market price.” President Granger added.

The president called on the relevant authorities to develop a Corentyne action plan solely based on information and information technology, adding that that is the gateway to several opportunities. He added that there is a need for information to make informed decisions. “You can sell your products but you need information about what the market is calling for.” President Granger said. President granger also called on residents to be cautious of contraband trade.

In order for Guyanese manufacturers to make a greater impact on the local, regional and international market, they need to be more innovative. More emphasis needs to be placed on packaging and the innovation of new products. If products are to be sold internationally, entrepreneurs need to place more emphasis on their creativity when packaging creating and packaging their products. 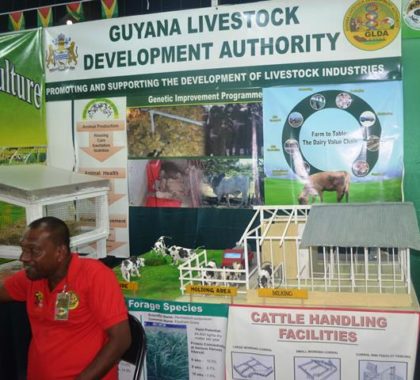 The region is full of resources and there is great room for agro-processing to develop and add growth to the region.

Also speaking at the opening ceremony was the president of the Central Corentyne Chamber of Commerce, Mr. Mohamed Raffik. He expressed that over the years the expo has evolved despite a number of challenges faced by the Chamber of Commerce, adding that there is still room for growth. In his message he expressed that in today’s global village scenario, Guyana needs to boost diversification in its economy. This, he said, can only come about with its citizens’ willingness to be imaginative, to think outside the box, to shed fossilized mind sets and prejudices, to inculcate the entrepreneurial spirit, to reach out to one another for ideas and partnership and cooperation.

“Sugar production is linked to every person’s life in this region. We are producing sugar at US 40 cents per pound and selling it for US 20 cents per pound. It is unfortunate that we are in this state. For too long sugar has been a political football and it is time the people of this region wake up and stop making sugar a political football. We must also understand that rice is a business and we have to run it like a business.” Mr. Raffik said. He called for persons and government to employ better technology for the industry and move away from labour intensive practices to fully exploit the sector’s abilities.

During his remarks, Minister of Business Dominic Gaskin said that government will continue to work with persons to formulate commodities to uplift the economy which will involve a diversification program to reduce import and advance export. “Even as El Nino posed great challenges for the region, Guyana is still expected to see a four percent growth in the economy.” Minister gaskin

Echoing similar sentiments during her remarks, guest speaker Ms Patricia Bacchus, CEO of Caribbean Containers Inc. She described Guyana’s economic status as “handsome given the state of other Caribbean nations like Trinidad and Tobago, who are experiencing economic contractions rather than economic growth.” She added that industries like the rice and sugar industry are susceptible to a number of factors such as world market prices. “If you remove rice and sugar from the equation, manufactured products would account for about three percent GDP.” she said.

Ms Patricia Bacchus while delivering remarks at the Berbice Expo

Ms. Bacchus also urged the residents of Corentyne to explore diversification. “Do not put all your eggs in one basket. I see diversification as simply adding more baskets to put your eggs. Reengineering the way we do business is as important as diversification given the integrated world economic trade arena.” she added.

The remaining days of the expo will see patrons getting a chance to visit booths set up by the Ministry of Agriculture. They will be given the opportunity to see the various products and the services they offer while having the opportunity to clear up issues with extension officers. The Berbice Expo and Trade Fair continues until Monday 22nd August. Patrons will have the opportunity to sample and purchase different items from exhibitors like Digicel, Ansa Mcal, Edward B. Beharry and Company and other small businesses.