Sunday evening the air around the Kitty Seawall Bandstand was electric as it came alive with performances from some of this year’s contestants in the Banks Calypso competition.

First-timer Quincy Lacon also known as EGO, spread a message of love and unity with his piece ‘We are de Guardians’.

“It speaks for itself; we have to secure Guyana regardless religion, culture, race. Whichever political party you choose to vote for…we still have a job to do as Guyanese and that is to safeguard Guyana in all aspects, -whether it be oil or borders, we have to safeguard our nation,” Lacon told DPI. 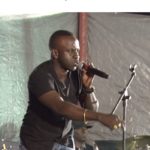 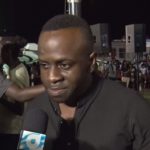 Quincy Lacon chatting with DPI after his performance

With the songwriting credits going to Bonny Alves, Lacon said the lyrics aligns with his vision for the country and hopes it will capture the public’s heart.

A confident, Lacon opined that he is read for the next leg of the competition – the semi-finals in Bartica on February 9. “I have seen many big names in the contest but I can tell you that no one is competition to me…I am going in to win it,” he remarked.

This weekend also saw to the crowning of the Junior Calypso and Soca monarchs. Omaiah Hall took the Calypso crown with 283 points while Relon Sumner is this year’s junior Soca monarch with a total of 251 points.

Hall told DPI that her win was definitely well-deserved since she put much time and effort into crafting and perfecting her winning song.

“I feel awesome. I felt that it was well deserved not because my other competitors were not great but I was able to give that 110 percent energy as I wanted to. I am so grateful to my mom, friends who were with me from the beginning…everything just worked out for me,” the 2020 Junior Calypso Monarch said.