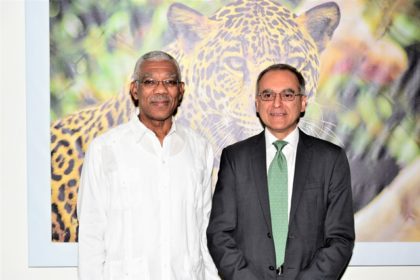 Dr. Singh from CI Guyana explained that that UNEP is currently assisting Guyana in detailing its Green State Development Strategy (GSDS) and that Mr. Sukhdev’s visit is part of that effort. During the discussions, the President and the visiting delegation discussed a number of issues including the creation of ‘green’ jobs, sustainable farming, transitioning into a ‘green’ economy and the country’s oil and gas prospects.

President Granger explained that Guyana is building on a record that was established since 1989 when the then Government committed Iwokrama to the international community for the purpose of research into sustainable management and development of tropical rainforests. He also noted that as the country proceeds along a ‘green’ development trajectory, it looks at like-minded states and international agencies for continued support and collaboration. 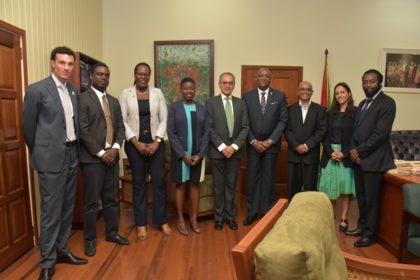 Following the meeting with the President, the team met with Minister of State, Mr. Joseph Harmon at the Ministry of the Presidency. During that meeting, Minister Harmon said that he is happy with Dr. Sukhdev’s visit as his expertise and experience in the environmental field will allow Guyana to benefit significantly, as the country continues to make strides with regard to the pursuit of a ‘green’ state.

Minister Harmon noted that the ‘green’ state must take not only the environment and protection of biodiversity into account but the social, economic and cultural wellbeing of all citizens. It is on this note he said, that the Government of Guyana is committed to working with all stakeholders to ensure that the best course of actions are taken in the pursuit of the ‘green’ state.

During his stay here in Guyana, Dr. Sukhdev will be facilitating several lectures and forums including the “We Own This Thing: Natural Capital in a Resource Rich State” at the Theatre Guild on Thursday, January 11, 2018. 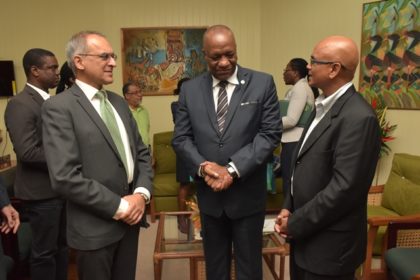 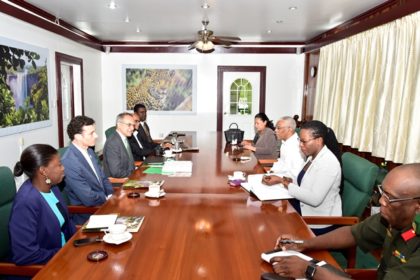