(MOTP) Georgetown, Guyana – (November 3, 2016) First Lady, Mrs. Sandra Granger, today, met with Ms. Ana Landa and Mr. Marko Lehto, consultants attached to the European Union (EU) Delegation in Guyana, who requested a meeting to discuss her perceptions of gender equality in Guyana, based on the work that she has been doing with women and teenage girls over the past year. The meeting was held at the Office of the First Lady at State House. 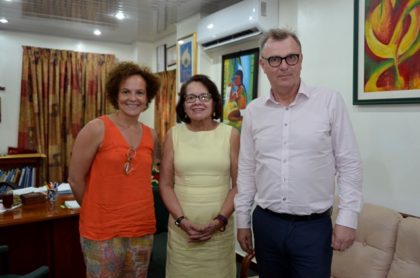 Ms. Landa and Mr. Lehto are part of a team that is undertaking a gender analysis study for the EU Focal Sectors, which are water, electricity, sea defences and agriculture.

The First Lady said, “I think what they are looking at is how you marry gender equality to the EU projects, so they just came to ask me about my take on things, so to speak. They will be here for one month working with other ministers and hopefully they would get a good idea about where they have to start”.

Meanwhile, in an invited comment, Ms. Landa said they are cognizant of the work that the First Lady has done to ensure that women and girls’ rights are observed countrywide.

“We know that the First Lady has been a champion with regard to women’s rights, girls’ rights so we would like to have her opinion about the actual situation about women’s rights and gender equality issues in the country and what things her Office is doing in that regard,” Ms. Landa said. 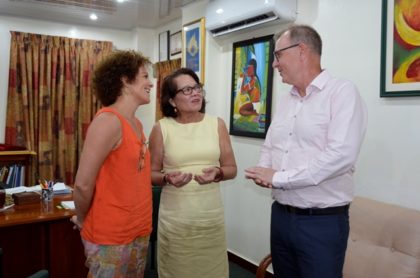