Some one hundred residents of the North Rupununi, in the Upper Takutu-Upper Essequibo Region (Region Nine) will benefit from two workshops focused on robotics and business compliments of First Lady, Mrs. Sandra Granger.

The residents, comprising both youth and adults will be engaged in the workshops which started today and will conclude Friday. Mrs. Granger this morning declared open the workshops at the Bina Hill Institute where it was disclosed that a group of 60 students from the Annai Primary and Secondary Schools as well as the Bina Hill Institute will be trained in STEM/ robotics. The remaining 40 community members will be trained in the area of self-reliance and success in business.

The workshops will be conducted separately by STEM Guyana and Interweave Solutions, with the Self-Reliance workshop being supported by the Ministry of Social Protection. The First Lady, in her opening remarks encouraged the participants to think about the possibilities technology can provide.

As such, the First Lady stressed the need for young people particularly women to get involved in STEM/ Robotics.

“This is why I am very keen on getting our young ladies interested in STEM,” Mrs. Granger added while noting that involving in STEM and robotics should not be seen as an imposition on indigenous cultures but rather organizing the community to perform in the 21st century.

“This doesn’t mean that we ignore our culture, or the beauties of the arts… but we need to know that if we are going to function in the 21st century, we need to have the skills,” she stated. Upon completion of the workshop each student will receive a robot which they can program. 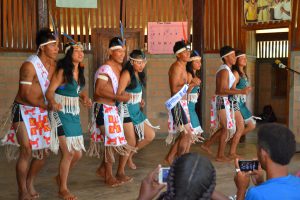 Students of the Annai Secondary School perform a welcome dance 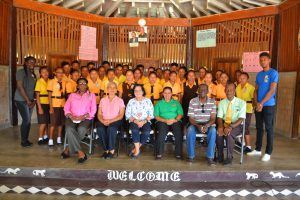 Meanwhile, the First Lady told participants of the ‘Self-Reliance and Success in Business’ workshop that there are numerous business opportunities within their communities.

“Here in Annai there are tremendous possibilities… Annai is famous for what I know as “full belly mangoes”. Why can’t you have a fruit processing or fruit juice processing manufacturing plant here, so that the mangoes don’t just fall on the ground when they are in season, but you have some being dried and some being preserved and some being used for fruit juice… you can have a big market here and that’s just one possibility” Mrs. Granger declared.

“You can come together and work as a co-op in your community or work individually but the idea is that you become economically empowered and you take it from there,” she added.

Ms. Jacqueline Allicock, Senior Councilor and Chairman of the North Rupununi District Development Board described the initiative by the First Lady as the “beginning of a new dream” for the North Rupununi and encouraged participants to capitalize on the training and information.

Likewise, 23 year-old Ms. Amanda Hodge, a resident of Aranaputa village, said the workshops will bring significant benefits to the community.

Ms. Hodge is a currently student of the Carnegie School of Home Economics and is pursuing studies in hospitality and catering there. She has committed to returning to her community to contribute to its development. The workshop she said is but one of the reasons she decided to participate.

“I plan on returning to the Community to share the knowledge and develop it with tourism… I think the workshop is a very good one where we will be able to benefit significantly,” the woman stated.

The First Lady’s Self Reliance and Success in Business Workshop, has thus far trained 1500 persons residing in all regions of Guyana.