First Lady, Mrs. Sandra Granger, today,  closed the curtain for 2016 on her successful Self-Reliance and Success in Business Workshop with the final graduating class of the year at the Blairmont Hindu Temple, West Coast Berbice. 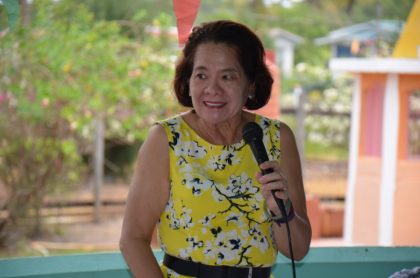 First Lady, Mrs. Sandra Granger speaking to the women at the final Self-Reliance and Success in Business Workshop for 2016 at the Blairmont Hindu Temple, West Coast Berbice

In her address to the participants, Mrs. Granger urged the women to take the skills that they have acquired at the workshop and apply it to their daily lives.  “The important thing is that you recognise you have it in yourself and nobody could take that away from you. So you’re starting out with that positive image… I do believe that when women move forward, your communities and your families move forward and our whole country will move forward because we’re exposing ourselves to learning and growing.” Mrs. Granger said.

Mrs. Granger encouraged self-confidence and urged independence as the women aim to improve their lives. “Part of the Self-Reliance and Success in Business Workshop is that you… not only become self-reliant but you develop self-esteem and you become confident in yourself and I’m sure over the past few days you have begun to realise that in many ways you can stand on your own feet, that your ideas and your views are valid ones and they arise from your experiences,” Mrs. Granger said. 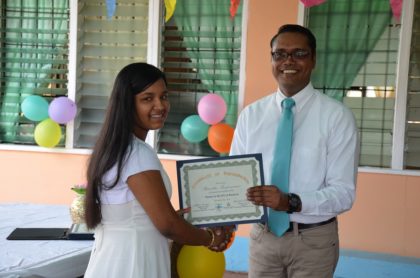 The First Lady also noted that the opportunity given to the women is not just limited to assisting them in their initial plan to launch successful businesses but also to form bonds that they would have built during the five-day workshop with women in their villages. “You have also learned not only, to manage a business but to see how you can improve your families and your communities, as you go about developing and expanding your business. At the end of it we hope that you will be able to conduct and maintain a successful business which will bring you, economic prosperity and also bring that kind of prosperity to your families and communities,” Mrs. Granger said.

Mrs. Granger continued to praise to the Ministry of Social Protection and Interweave Solutions for their commitment in ensuring that each workshop is successfully done throughout Guyana. 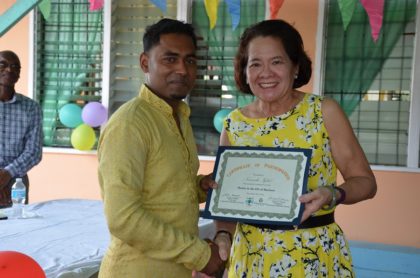 Additionally, Mr. Yohann Sanjay Pooran, Facilitator at Interweave Solutions Incorporated noted that at the end of this workshop 36 persons have been trained to become successful business owners.  “Not only are women being trained but women are also creating their own business plans, based on statistics from Interweave Solutions… We see that a number of women have gone on to start new enterprises and new business within their communities, where they have employed additional people and created opportunities.  We also see situations where women who own businesses have gone on to expand and grow those enterprises into wonderful ventures,” Mr. Pooran said.

He further noted that the programme has been implemented across cultural, ethnic and religious groups.  “It doesn’t speak to any religious cultural, ethnic or political issues. It speaks to family issues, women issues. It speaks to the needs of people; ordinary people in communities across the country. As we’ve worked together with women to create solutions and pathways to success we have seen women and men from all backgrounds, who have come out empowered, emboldened and ready to face any challenge in their way,” Mr. Pooran said. 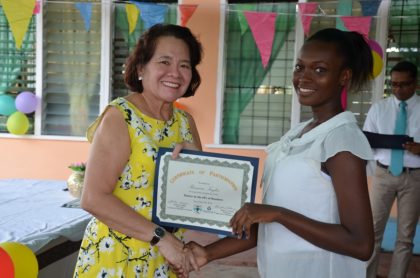 Meanwhile the participants of the workshop are eager to apply their new found skills in establishing their own businesses.  According to 17 year old, Ms. Renacia Taylor said the workshop is almost like second nature to her since she had enjoyed Principles of Business at secondary school and she intends to open her business.

Twenty year old, Ms. Hemwatie Totaram said she also plans on establishing her own business and that the project has been beneficial to the women of the community. While 16 year old, Ms. Rawatti Boopnarine said that even though at the beginning of the workshop, they were shy, the workshop has boosted the young women’s self-esteem. 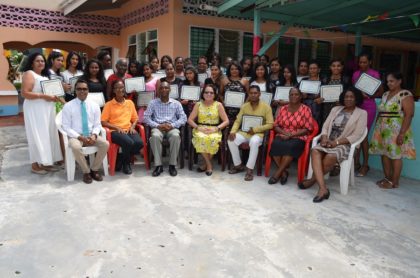 While the workshop mainly targets women, a few men have had the opportunity to participate and Mr. Narendra Iqbal, Pandit at the Blairmont Hindu Temple is the most recent one to graduate from the programme.

The Self-Reliance and Success in Business Workshop is an on-going project between the Office of the First Lady, the Ministry of Social Protection and Interweave Solutions Incorporated.  The workshop is aimed at empowering women across Guyana to be successful business owners and leaders in their communities.  They have successfully trained 350 persons in eight Regions across Guyana.