GECOM must investigate all discrepancies found in national recount

Minister of Public Telecommunication Catherine Hughes says the onus is now on the Guyana Elections Commission (GECOM) to investigate all instances of discrepancies unearthed during the ongoing national recount of the March 2, 2020, General and Regional Elections.

Minister Hughes was responding to earlier statements by PPP nominated Commissioner Sase Gunraj, who told the media that the commission could not address the content of the observation reports from the districts, as the issue is only suited for an elections petition. He said the final numbers of the recount is only what matters. 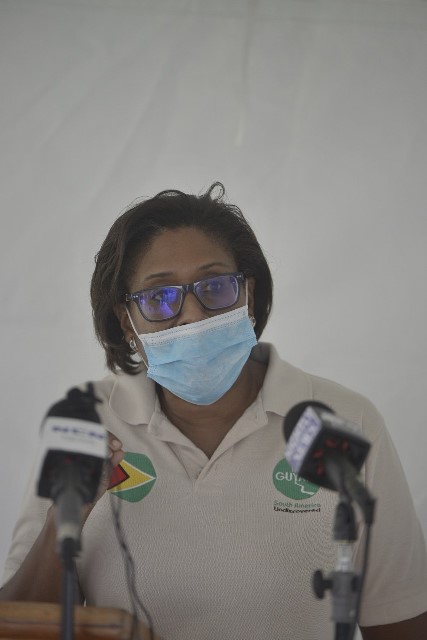 Counting agents of the APNU+AFC, since the commencement of the national recount on May 6, have been reporting increasing numbers of anomalies in ballot boxes ranging from the names of dead persons being ticked off as voted on the Official List of Electors (OLE) to migrated voters.

Other instances include excess ballots in boxes when fewer persons have been registered to vote at a particular polling station.

The agents have been raising objections during the recount, providing evidence in each instance.

Minister Hughes said agents have the right to raise legitimate concerns and to make those objections.

“I think we are missing the real issue is whether or not those documents (death certificates etc) are valid, legitimate or not. This is where we want to call on GECOM itself and even the PPP to check whether the death certificates that we are producing, based on the objections that we are making are valid or not,” she told journalists.

The Minister said the Coalition has been trying to meet with the commission for over a week now, to get an explanation as to how the elections body will treat with all the discrepancies unearthed and the supporting documents the Coalition has in its possession.

“The conversation needs to be, if these documents are found to be true, if these different persons have voted and they are dead, what it says about the process.”

She further debunked suggestions by the PPP that “we are here wasting time,” noting that it is not the case as the Coalition has valid death certificates.

Minister Hughes reminded that it was the Coalition that objected to a bloated voters’ list and the fact that party agents had made objections on March 2.

“First, when we started on these elections; we were supposed to have a house to house registration process.  That was abandoned. Then we ended up with a ‘hodge-podge’ of a list which we knew was impossible because it is a statistical impossibility to have a population of 750,000 and have a list of more than 600,000 persons.”

She said while “we want to get to the numbers before we do, what about the integrity about the elections.”