The recent currency fluctuations are being driven by several known gold producers and exporters and additional players according to Finance Minister Winston Jordan. The minister briefed the media today, following a meeting with the banking association’s representatives at the Ministry of Finance today. 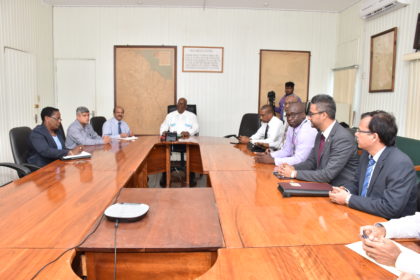 Minister Jordan stated that the bankers offered the opinion that with major exports declining such as sugar, timber and rice, and only gold increasing but at lower prices, foreign exchange rates would be affected somewhat. He added that additional players or ‘demanders’ of foreign currency are now in the market and there appears to be hoarding taking place.

He said, “Some of the dealers in gold are not necessarily declaring all that they could, and some of them do have foreign retention accounts. Those are some of the reasons that they put forward.”

It was also put forward by the banking representatives that there is some mismatch between supply and demand, Minister Jordan added, at the level of certain banks.

He further explained that one suggestion put forward is that the banking representatives need to meet more often with the Central Bank Governor Dr. Gobind Ganga. The first, such meeting, he noted, will take place next week.

The meeting will focus on a number of issues, Minister Jordan said, “Such as how the Central Bank will continue to support them to get over this hump, which we all agree is usually a dry period for the supply of foreign currency. Even in good times, January and February are always tough months. They are going to meet and determine on their side what they are going to do and on the Central Bank side, how they would support them.”

The Finance Minister added that the banks would be expected to “weed out” what he described as an illegitimate need for foreign currency and stressed that there was no need for “this bidding war to continue.”

Jordan said the banks had in the past tried to manage the rate at GYD$210 to US$1.00. It was explained that in December there were some actions, individually that would have allowed for this continuous bidding hence the tacit agreement that the rate would be set around $210 to US$1.

Lending support to the Minister was Dr. Ganga who noted that whilst Guyana lost US$30M  to US$40M in foreign exchange earnings in 2015 from rice, sugar, bauxite and forestry, the Central Bank injected approximately US$30M on the market to satisfy foreign exchange demand, during that period.

Asked about the amount of US dollars Central Bank has injected into the local market for the year and the amount thought to be “hoarded” by some exporters in foreign exchange retention accounts to facilitate their purchase of manufacturing inputs, Dr. Ganga replied, “We know what the figure is but I can’t tell you what the figure is.”

A solution put forward by Minister Jordan to ease the current currency fluctuations is that Central Bank would first seek to persuade those account holders to use their funds, “instead of purchasing from the market to avoid a run on the rate.”

If that fails, he noted the Central Bank’s Board would have to consider ordering the closure of those accounts, “We don’t want to use a heavy hammer to kill an ant really, but what I’m saying it is a tool that is available to you. In other words, what the government has done so far is urge moral suasion but I mean there’s a limit to moral suasion at a time when the rate will deteriorate then you have to do more than just moral suasion.”

The Finance Minister is in the meanwhile, appealing to the media to stop fuelling speculation in the foreign exchange market as this could result in a further devaluation of the Guyana dollar which would in turn fuel inflation and lead to increasing interest rates.

The Central Bank yesterday  issued a statement saying that exporters were discovered hoarding large sums of foreign currencies in their bank accounts. The Bank also stated that these exporters were making unnecessary purchases on the market, further putting pressure on the trade.

The Central Bank responded to a statement, Wednesday, by the Guyana Manufacturing and Services Association (GMSA) which pegged the selling rate for US at $230 for US$1. The bank refuted this and listed the weighted average selling rate at $218. The $230 rate was for credit card transactions, the bank explained.