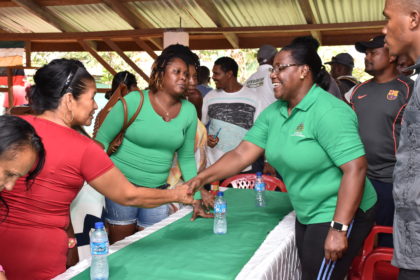 Minister in the Ministry of Natural Resources, Simona Broomes engaging with miners in Puruni, Region Seven

The government is exploring the regularisation of landings in mining districts as a means of ensuring compliance by shop owners.

Minister within the Ministry of Natural Resources Simona Broomes told miners at the Puruni Landing, Region Seven that she has engaged the Guyana Lands and Surveys Commission (GLSC) to address the issue.

The Minister met with miners over the weekend, and was responding to their questions and concerns about conducting business at these landings. Minister Broomes explained that the current regulations provide lands in mining districts for “a residential house or to sell things relating to mining.”

However, the Minister cautioned that the receipt that is provided to shop owners for this permission is not a title for the land they operate on. “I spoke to the Commissioner of Lands and Surveys, (I’m) bringing (this) to his attention so that if you put these buildings and all of that, you (have) got some kind of security by receiving a title for the land,” Minister Broomes told the miners. 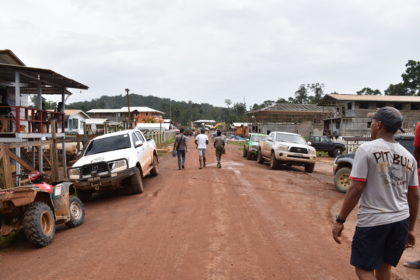 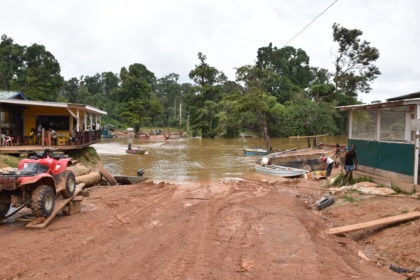 Shops at the river’s edge of the Puruni Crossing

Regularising these landings could reduce the issue of squatting and ad hoc establishments of shops at these locations. Minister Broomes noted the complaints by the operators of the Puruni Crossing that shops are impeding them from docking properly since they are too close to the river. There were also complaints about improper disposal of garbage in Puruni.

Business owners in Kurupung and Imbaimadai have also called for regularisation in those areas.