Govt to get UN assistance in eradicating mercury use

The government will be speeding up its efforts to eradicate the use of mercury in the mining sector.

Minister of Natural Resources, Raphael Trotman, said the recent mercury incident at the Guyana Geology and Mines Commission (GGMC) Brickdam Complex drives home the point why mercury has to be eradicated. 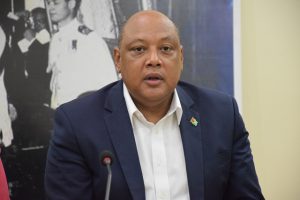 “We are intending to speed up our implementation”, Minister Trotman said on Tuesday afternoon, during a joint press briefing with Minister of Public Health Volda Lawrence.

The United Nations Environmental Agency will be providing assistance towards this end he added.

Two teams from the Pan American Health Organisation (PAHO) will be investigating mercury emissions at the GGMC Brickdam Complex. This comes after the Guyana Gold Board had to suspend the burning of gold due to health and safety concerns back in April.

Minister Trotman noted it is a chance to review the standards and protocols used by the GGMC and Gold Board, “The PAHO investigative teams that will examine the protocol, standards of our PPE (personal protective equipment) and ensure that there are no traces of mercury remaining at the Brickdam complex.”

The minister added, “At some point in time we may have either surpassed the standards or not met them and so I think this issue gives us a chance to review all the systems all the protocols and even to recalibrate them.”

The review would include examining the mercury exposure levels to ensure they meet international standards. The Ministries of Natural Resources and Public Health will examine their databases to determine previous mercury levels and exposures with the aim of reviewing same.