On Thursday, February 13, 2020 the High Commission of the Co-operative Republic of Guyana in the Republic of Trinidad and Tobago hosted an Official Reception in honour of Guyana’s Fiftieth Republic Anniversary.

Speeches were delivered by Senator the Honourable Dennis Moses, Minister of Foreign and CARICOM Affairs of the Republic of Trinidad and Tobago on behalf of his Government, and Ms. Deborah Yaw, Acting High Commissioner for Guyana.

Minister Moses, among other things, spoke of the shared history between Guyana and Trinidad and Tobago and the enduring partnership of the two countries which resulted in the achievement of many common international goals. He also mentioned Guyana’s pioneering role in CARIFESTA. The Minister briefly referred to Guyana’s petroleum sector but highlighted Guyana’s advocacy for the protection of the environment. 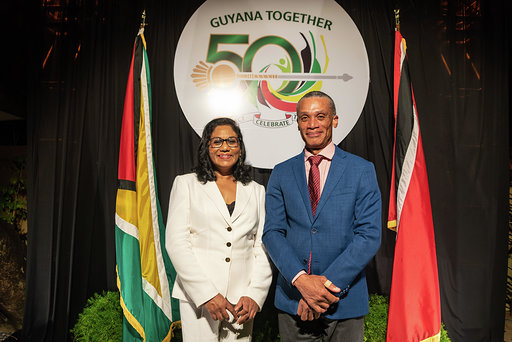 In her Speech, Ms. Yaw alluded to the many factors that shaped Guyana in its pre-independence years which ultimately led to its proclamation of republican status. She described Guyana as a country with a rich multi-ethnic, multi-cultural and multi-religious tapestry – the unique combination of the different people who came to is shores.

Guyana’s leading role in the region and on the wider multilateral stage was emphasised in the context of the Caribbean Free Trade Association (CARIFTA) and CARICOM, as well as the high-profile positions it occupied in the United Nations and its Organs. Ms. Yaw highlighted the many “firsts” that Guyana achieved very early after it became a Republic such as being the first CARICOM member state to sit on the United Nations Security Council – which it did on two occasions, and the first CARICOM member state to hold the Presidency of the United Nations General Assembly in 1993.

With respect to Guyana’s oil and gas industry, the rapidly moving upstream activity was underscored but a call was made to invest in other sectors of the economy and to explore Guyana’s rich tourism offerings as well. Guyana’s Green State Development Strategy was also highlighted.

A call was made for friends and international partners to continue to cooperate with Guyana in its development trajectory and in this regard the strengthened relationship between Guyana and Trinidad and Tobago through the opening of Diplomatic Missions in Georgetown and Port of Spain was lauded.

Ms. Yaw further emphasised the many accolades to Guyana as a tourism destination especially in light of recent international recognition such as the Best Eco-tourism Destination Award at the Berlin Tourism Trade Fair, the listing by the UK and USA of Guyana as a top destination to visit in 2020 and a recent CNN Travel publication on the Guianas.

In closing, the Guyanese diaspora was charged to continue to work together to preserve, protect and further develop the homeland.

Guests included members of the diplomatic corps, international organisations, local government officials, Chambers of Commerce, Trinidadian businesses with interests in Guyana, the Guyanese diaspora and representatives from Guyanese student bodies in various tertiary institutions including the University of the West Indies.

High Commission of the Co-operative Republic of Guyana, Trinidad and Tobago.