This facility will be used to store, among other items; imported semen and embryos from dairy cattle, sheep and goats. It will also be used to conduct testing on animals and poultry, and specifically look at the quality of feeds; grasses and legumes use to feed cattle and sheep 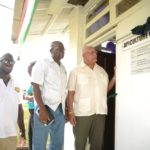 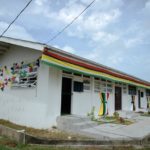 It comes at a time when there is a growing demand for livestock products both locally and internationally. According to Minister of Agriculture, the Hon. Noel Holder, increase demand of 70 percent by 2050 is expected.

With this growth, the government Minister Holder said, is doing its part to ensure the necessary facilities in Guyana are upgraded to international standards.

The Agriculture Minister said while livestock contributes (3) three percent to the national output, the industry has shown growth of 14 percent in the last five years.

“We also expect this growth to continue in the next five years, the 14 percent growth is a direct result of our (government) investment in the industry, we are focused on maximizing production and productivity, improving diversification, investing heavily in genetic improvement, management systems, and animal health,” he noted.

Minister Holder was speaking at the official commissioning of the Animal Nutrition Laboratory.

The facility which will also house an apiculture unit that will produce honey and several byproducts of beeswax.

So far, the government has contributed approximately $70M towards the construction of a state-of-the-art abattoir in Region Five, Mahaica-Berbice. That 70M is for construction of the bridge and fence along with the installation of water and the electricity, as the project is being funded by the Inter-American Development Bank (IDB). The administration has also invested $200 Million for a pig abattoir in Region Four.