Leguan stelling emergency works to wrap up by Friday

Emergency works on damaged portions of the Leguan stelling are expected to be completed by Friday, December 11. This is was disclosed by Minister within the Ministry of Public Infrastructure Hon. Jaipaul Sharma during a site visit today.

It was explained that the $413Million project to rehabilitate and construct the stelling was already underway when a portion of the walkway along the stelling collapsed after a canter truck that was overladen with paddy attempted to make its way across the platform. 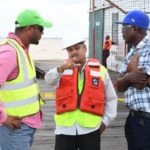 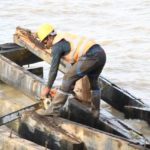 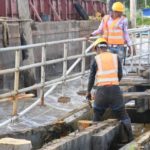 “It is part of his [S. Maraj Contracting Services] scope of works to complete the entire stelling, but his attention is now on this portion,” Minister Sharma said.

Under the platform are grids that placed around the 16-year-old piles that have felt the brunt of the tides.  The Minister told DPI that each grid surrounds three piles. At the time of the visit, three grids were already opened with 9 new piles have been driven into the river bed, while the old ones were removed.

To reduce the rate of deterioration of the new stelling there will be a departure from the process of just driving wooden piles into the river bed.

“There will be 156 timber piles, and … we are going to encase [them] with concrete. After the work is done, there will be a special mould the contractor will place,” he explained. This will increase the lifespan of the stelling without much maintenance required.

A concrete structure will be built at the front of the stelling, inclusive of piles and beams to support the stelling. Some of these piles have already been driven into the river bed. “

According to the Minister, there was a shift from the estimated reopening of the stelling from Thursday to Friday. “I want to ensure that when they [the contractor] finishes this portion, it will be something that could withstand the weight of the traffic that will be flowing on the stelling,” he underscored.

Noting the unfortunate circumstances under which the stelling collapsed, Minister Sharma called on residents to obey the rules of the stelling that were instituted to ensure health, safety and effective traffic management.

“People have to be responsible because if the stelling is to give way, the whole of Leguan is going to suffer. So, all those utilising the stelling for trade and commerce should pay strict attention to whatever weight restriction is given by Transport and Harbours.”

Meanwhile, Superintendent of Works within the Transport and Harbours Department, Aubrey Walcott, who is functioning as the project supervisor disclosed that the contractor is also in the process of placing caps on the driven piles along with the positioning of the corresponding beams.

In 2018, the contract for the stelling was awarded but was delayed, partly due to re-assessments that showed the need for much longer test piles than the original 80-feet which was originally required.

Leguan Stelling will be completed in two phases. Phase one will entail the upgrade of the deck at the stelling and Phase two will feature the construction of a concrete commercial area.