– encourage others to exercise democratic right

Several voluntary groups and individual candidates are contesting the LGE, as well as the three main political parties: A Partnership for National Unity (APNU); the Alliance For Change (AFC) and the People’s Progressive Party Civic (PPP/C). 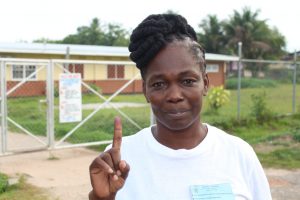 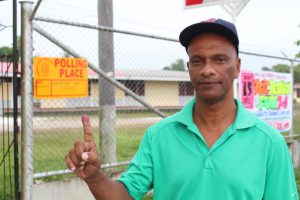 APNU candidate and first voter at the Mackenzie High School, Constituency Two, Stephen Messiah speaking to the Department of Public Information (DPI) noted that the election is a good step made by the government since it empowers residents to elect persons of their choice to ensure the good governance of their communities. Messiah noted that candidates, like himself, must listen to the views of the residents in order to get the job of developing their communities done.

Along with Messiah was Coretta Braithwaite-Walton, who was the first voter at the Mackenzie Primary School, Constituency Two Linden. Walton is also contesting in this area as the AFC candidate and encourages all to exercise their democratic right as she did today.

As the election day continues, persons are encouraged to head out and vote. Polls close at 18:00hrs.