– says Audit Office should be ‘pinnacle of integrity’

Minister of Public Infrastructure, Hon. David Patterson has condemned the leakage of an Office of the Auditor-General report to the media saying the document is missing vital information.

Media reports say the government has been accused of failing to account for over $800M that was spent in 2018. 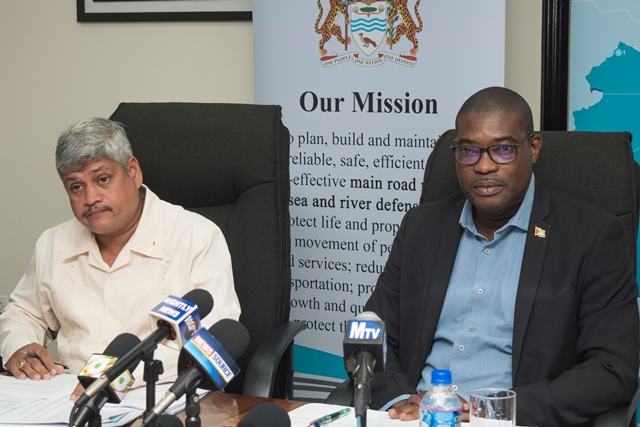 “It is unprofessional for an audit report to be leaked,” he told reporters at a press conference on Wednesday.

“The audit office, you would think, has to be the pinnacle of integrity because of how important it is,” Minister Patterson stated.

He added that it was unusual for the Auditor-General to be tight-lipped on such a sensitive matter in the media.

“The Auditor-General has not condemned it. You would expect an institution such as that… when something like this happens, and particularly in a period like this, the Auditor General would make a comment on it.”

Minister Patterson stated that he had not seen the Audit Office report but based on the media accounts of the report, it appeared to be a summary of what was presented by the ministry.

One of the issues reported relates to the overpayment for road works done in Mabaruma (Region 1) and Lethem (Region 9).

As it relates to Mabaruma, it was reported that the ministry overpaid for the construction of roads and failed to install drains. However, Minister Patterson pointed out that while the ministry was executing the works, they were approached by the Town Council, which took on the responsibility for constructing the drains.

This, he said, allowed the ministry to construct additional roads in the town. According to the minister, that information was apparently left out of the leaked report.

Similarly, in Linden, the ministry was approached by the Town Council which sought a different design for the road from that which the ministry had already planned.

Minister Patterson said an agreement was reached and instead of having open drains as initially planned, tubes were placed underground similar to what is done in Brazil. Again, that explanation, the minister said, must not have made it into the audit report.

According to the minister, “we [the ministry] spent hours detailing and explaining. I do not mind you do your job but put our explanation there.”

Minister within the Ministry, Hon. Jaipaul Sharma also cautioned reporters not to quote the audit report unless it was verified by the Auditor General especially since it was not laid before Parliament.