Minister within the Minister of Communities, with the responsibility for Housing, Valarie Adams-Yearwood and team, has reached out to more than 150 persons living with disabilities.

The minister and staff of the Central Housing and Planning Authority (CH&PA) assisted persons at the Guyana Society for the Blind, High Street, Georgetown, who would have already applied for their house lots and provided free application forms to others who were applying for the first time.

The beneficiaries said they were appreciative to have received the attention of the Central Housing and Planning Authority (CH&PA) since this will finally allow them to focus on building their homes. 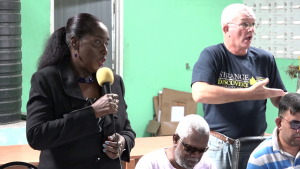 Minister within the Ministry of Communities, with responsibility for Housing, Valarie Adams-Yearwood

A section of the gathering at the Guyana Society for the Blind on High Street, Georgetown

According to the minister, areas on the East Coast of Demerara (ECD) will be available by year-end at a cost ranging from $92,000 to $150,000. However, she pointed out that persons who would have already applied for their house lots will be confirmed on the spot.

Minister Adams-Yearwood said that CH&PA is shifting its focus to land allocation on the ECD since there has already been a large distribution of house lots on the East Bank of Demerara (EBD).

“As we speak, we have some lots on the East Coast, more particularly, Mon Repos, Good Hope. By the end of the year, we are going to have some at Cummings Lodge, and we are also looking in the very near future to have some at Annandale and Foulis, ECD.”

The minister further added, “We are currently looking at other areas, which we hope to have available to us next week and when those areas become available, we are going to proceed immediately with the Sub-Division and make those lots available to persons who wish to build homes in Region Three.”