The government will establish a public accountability and oversight committee to report on the Natural Resource Fund (NRF). 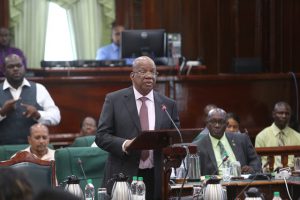 Minister of Finance, Winston Jordan, said the committee will consist of a wide cross-section of stakeholders and will be mandated to report on the investment of petroleum revenues and utilization of withdrawals from the Natural Resources Fund.

The minister made the announcement during his presentation of the 2019 National Budget.

The government tabled the NRF Bill in the National Assembly last week. The Bill meets 21 of the 24 Santiago Principles, the generally accepted principles and practices of Sovereign Wealth Funds (SWF), Minister Jordan noted.

The NRF Bill is one of several legislations and policies the government is putting in place to govern the oil and gas sector. Guyana is projected to produce first oil in the first quarter of 2020 after making nine successful oil discoveries since 2015.

The Bill was informed by public consultation and feedback received on the ‘Green paper’, titled “Managing Future Petroleum Revenues and Establishment of Fiscal Rule and a Sovereign Wealth Fund”, which was presented to the House in August.

He stressed the importance of putting systems in place to ensure the sector is managed with transparency and accountability.