The Children’s Mashramani Regional Competition has opened with more than 20 primary schools from Region 4 showcasing their talents at the National Cultural Centre on Monday.

St. Pius Primary, set the stage as the first school to perform and delivered an exceptional performance titled Reflection, under the category of Fantasy.

The all-girls dance group, decked out in their multi-coloured ballerina costumes, portrayed the lucid dream of a girl whose dolls came alive during a visit to the toy store. 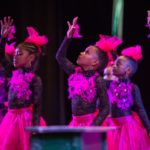 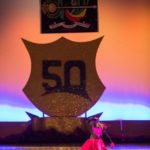 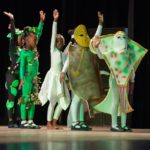 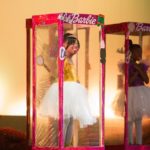 A scene from Reflection by St Pius Primary. 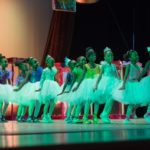 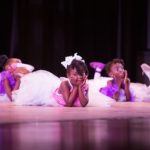 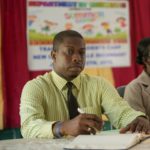 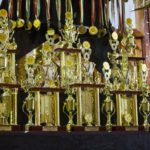 The Trophies up for grabs.

The piece which included well-crafted props was a crowd pleaser and left the audience wanting more.

Other schools such as Sophia Primary, North Georgetown Primary, Westfield Prep and Smith Memorial did not disappoint.

The children’s competition, which is specially coordinated by the Ministry of Education, to promote the expressive arts, is a part of the national Mashramani celebrations.

The ministry aims to encourage all schools, parents and communities to work cooperatively in providing opportunities for students to display their talent and to foster a sense of pride and national identity.

According to Sherwyn Blackman, District Education Officer, the competition will see hundreds of performers from approximately 66 schools private and public schools, from nursery to secondary level.

He said the ministry has an exciting addition this year to target violence in schools.

“Since it’s our 50th [Republic Anniversary] we have a new addition to the programme this year, which is the jingle competition,” Blackman stated.

He continued “, that is as a result of an intervention from our Minister, Dr. Hon. Nicolette Henry, where the jingle competition focuses heavily on the violence that we have in schools”.

The categories include Fantasy, Ring Games, Religious Beliefs, Masquerade Band, as well as, and Dramatic Poetry.