Georgetown, Guyana – (March 31, 2017) Director General of the Civil Defence Commission (CDC), Colonel (Retired) Chabilall Ramsarup, on Wednesday, handed over a Regional Multi-Hazard Preparedness and Response Plan to the Cuyuni-Mazaruni Disaster Risk Management Committee at the Bartica Regional Hospital Boardroom.  In addition to the Multi-hazard Preparedness and Response Plan, several hazard maps of the Region and a certificate of completion were also handed over to the Committee. 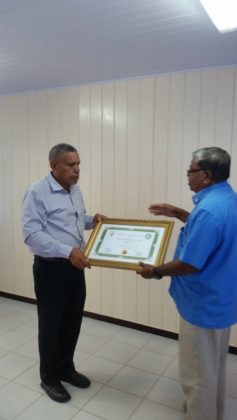 This plan and maps will provide the Cuyuni-Mazaruni Disaster Risk Management Committee and its member agencies with the necessary baseline data to guide decision-making and inform more effective roll out of Disaster Risk Management initiatives within the Region. The maps and plan detail the Region’s disaster risk profile and outline necessary preparedness and response functions, which are to be carried out by specific stakeholders within the Region during emergency and disaster preparedness and response periods. The system was developed over the period November 2016 to January 2017 through a series of consultations and community mapping exercises, which saw the development of the Multi-Hazard Preparedness and Response Plan and the regional hazard maps.

Colonel Ramsarup, in an invited comment, said that the Commission remains committed to building Guyana’s disaster risk management capabilities through stakeholder engagements. This is in an effort to build resilience at the regional level so as to reduce disaster risk through enhanced preparedness and response capabilities. He said the Plan will give the Region to independently mange its own disaster planning and resilience. “Going forward the Committee will be tasked with ensuring that the guidelines 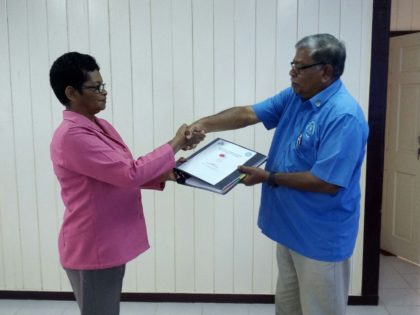 and other measures contained in the Plan are put into action and implemented so that in the event we have disasters in various regions at the same time, the Region will be able to respond and not be solely dependent on the CDC,” he said.

Regional Chairman, Mr. Gordon Bradford, who is also the Chairman of the Committee, chaired the meeting of the Regional Disaster Risk Management Committee. A total of 17 members attended the inaugural meeting including representatives of the Joint Services, Regional Democratic Council, Bartica Regional Hospital, and the National Agricultural Research and Extension Institute.