United Nations Secretary-General (SG) Antonio Guterres has announced that he will be visiting the hurricane-ravaged islands of Antigua and Barbuda, and Dominica on Saturday.

At a media conference, the SG told reporters that coming out of the recent UN General Assembly, some of the most crucial speeches during that period came from leaders of Caribbean nations reeling from back-to-back hurricanes. 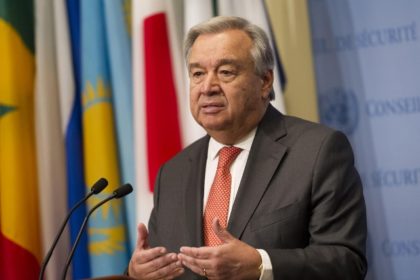 The visit, Guterres said, is “to survey the damage and to assess what more the United Nations can do to help people recover, visiting of course also the operations that are taking place there.”

The SG said he was struck most of all by a prevailing message from all the Caribbean leaders including from the hardest hit countries, that they needed urgent support.

The Prime Minister of Antigua and Barbuda, Gaston Browne, reported that the entire population of Barbuda had been left homeless while the Prime Minister of Dominica, Roosevelt Skerrit, declared that he had come to the United Nations “straight from the front line of the war on climate change”.

To date, the United Nations and its partners have provided a variety of humanitarian assistance to the Caribbean Region by air and sea; 18 tons of food, 3 million water purification tablets, 3,000 water tanks, 2,500 tents, 2,000 mosquito nets, and school kits, 500 debit cards for cash assistance, and much else.

According to Guterres, appeals have been launched for $113.9M to cover humanitarian needs for the immediate period ahead. He also commends the countries showing solidarity with the Caribbean countries at this time of dire need, including those doing so through South-South cooperation.

The United Nations, he says will continue to help countries in the Caribbean to strengthen disaster preparedness, working closely with the Caribbean Disaster Emergency Management Agency.

“We are strongly committed to helping small island states and, indeed, all countries to adapt to inevitable climate impacts, to increase the pace of recovery and to strengthen resilience overall. Innovative financing mechanisms will be crucial in enabling countries, like the Caribbean ones, to cope with external shocks of such significant magnitude,” Guterres said.

More than 7000 Guyanese are among the thousands of people living in the islands that were affected by the recent hurricanes.