─ towards the school’s science programme

Science can assist in the thrust to modernise Guyana, especially as the country embarks on a future in Petroleum. It is with this in mind that His Excellency, President David Granger has contributed $1M to the Saraswati Vidya Niketan Secondary School’s Science Programme.

His Excellency, President David Granger, delivers the feature address to guests and the graduating class of 2019 at the Saraswati Vidya Niketan Secondary School. 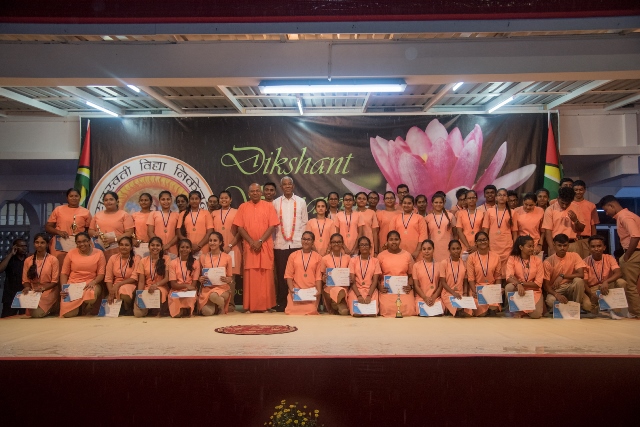 The Head of State made this announcement on Sunday evening during his feature address to guests and the school’s graduating class of 2019.

“I will make a small donation of just a million dollars to SVN [Saraswati Vidya Niketan Secondary School]… to expand its science programmes, to help equip its science laboratories which are under construction.”

His Excellency commended the performance of the school’s 2019 CSEC students, describing it as nothing short of “stellar”. He especially singled out SVN’s Science Programme.

“SVN is moving on the correct path, it is emphasising science education without de-emphasising the humanities… the school’s decision to erect a science building equip with modern laboratories is a recognition of the validity and the urgency of science education.”

He further commended SVN’s for its forward-looking plan, which is to install a solar system to generate electricity for the school.

“Solar energy will allow the school to become a model of a noble energy generation.”

Speaking of his government’s ‘Decade of Development: 2020-2029 plan’, President Granger reiterated the principal aim of establishing a first-class, A-grade secondary school in every region of the country.

The ‘Decade of Development; 2020-2029’, according to the president, will equip students for a science-driven world, give them access to free education, including university and access to information technology. There will also be economic diversification, expansion and restructuring he stated.