The government continues to build the capacity of officers of the Guyana Police Force (GPF) through a number of training programmes. Twenty-five (25) officers today, commenced a 90-day training course in “The Introduction of Mandarin” at the Police Officers’ Training Centre, Camp Road and Young Street, Eve- Leary.

The training will be conducted by tutors from Confucius Institute of China. Mandarin is a group of related varieties of Chinese spoken across most of northern and southwestern China. 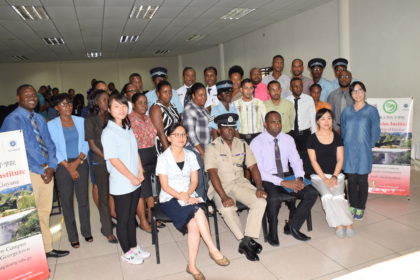 Senior Superintendent and Crime Chief Wendell Blanhum (second from right), Assistant Commissioner Paul Williams (second from left) along with Professor of the Confucius Institute, Janet Ma (far left) and the 25 Police Officers who will participate in the Mandarin training course, and other members of the Guyana Police Force

Senior Superintended and Crime Chief Wendell Blanhum said that he was delighted that officers of the force have been given the opportunity to learn a second language.

“Guyana is poised to become an oil economy, and definitely we are going to have an influx of many nationalities so we are making a step in the right direction by having the facilitators from the Confucius Institute,” the Crime Chief stated.

Blanhum also urged the participants to make full use of the opportunity, and become a member of the GPF that is fluent in speaking Chinese.

Assistant Commissioner, Paul Williams said that the training course being afforded to the officers will bear fruit. “I know definitely out of this training we will benefit, but then I want to see that there is an initial gap or bridge being established rather than waiting for another engagement,” the Assistant Commissioner explained.

The Assistant Commissioner said that the course will also help officers to assist Chinese nationals making reports while awaiting an expert. Assistant Commissioner Williams stated that, “I want to see this relationship blossom, get stronger and in terms of where we can be able to serve the Chinese community.”

The first phase of the course will run for four weeks, and upon completion, the officers will undergo an assessment. Those who are successful will participate in a summer camp in Shanghai, China.