As the Coalition Government continues its move towards providing a healthy and educated Indigenous population, much emphasis is being placed on hinterland educators and medical workers.

This was disclosed by Member of Parliament (MP), Hon. Mervyn Williams, on August 1, during a community meeting in the village of Kako in the Upper Mazaruni District, in Region 7, Cuyuni-Mazaruni.

The MP’s visit was intended to have a firsthand look at the village, to identify areas in which additional developmental works can be done and to listen to the concerns of residents.

MP Williams, while addressing one of the issues raised by a resident of the community, noted that there is an ongoing negotiation between the government and the Guyana Teachers’ Union (GTU) to establish a comprehensive package and plan for hinterland teachers. 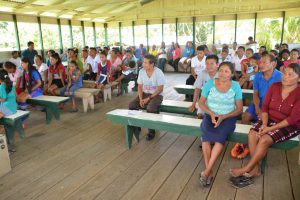 Residents of Kako Village, in Region 7 gathered for a meeting with Member of Parliament, Hon. Mervyn Williams 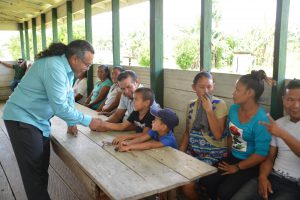 “Teachers have received an increase [in wages], and in the preparation of the 2020 budget it is contemplated that there will be a significant increase for teachers and public servants,” MP Williams said, during the long discourse with Kako residents.

Already, several senior teachers from the district were among those who received duty-free concessions from the Coalition Government.

Another concern was also raised about the medical outpost having a permanent doctor. In his response, the Member of Parliament assured that he will relate the concern to the Public Health Minister and posited that the replacement will be made at a shortest possible time.

Further, residents of Kako were encouraged to amalgamate and submit a developmental proposal to the Ministry of Indigenous Peoples’ Affairs (MIPA); noting that they will be assisted with the funding through the grants.