Another major flood averted in Reg. 3

− koker was being repaired by GuySuCo

Heavy winds coupled with high tide and thunderous waves damaged the koker door at Anna Catherina on the West Coast of Demerara during the afternoon hours on Friday, May 17. Water from the Atlantic was gushing in at a fast rate causing residents to panic, but the prompt response from the Regional Administration and GuySuCo averted what could have been a major catastrophe in the area.

According to Regional Executive Officer (REO) Jennifer Ferreira-Dougall, residents from the area made contact with her office, after which she immediately activated the disaster response team. 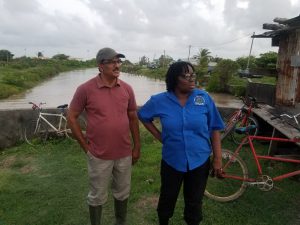 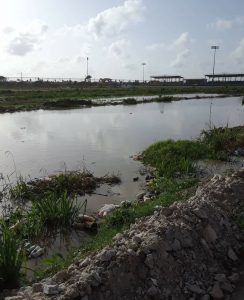 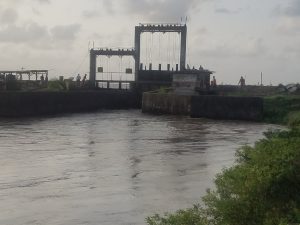 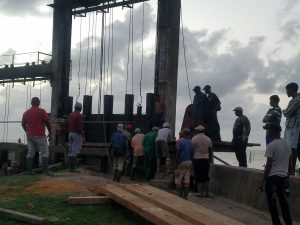 “After I received the information of the koker being breached, I immediately activated the disaster response team and alerted GuySuCo of the emergency. It took my team and I, roughly 20 minutes to arrive on site and I must say that GuySuCo also arrived same time with materials and workforce to remedy the situation,” REO Ferreira-Dougall noted.

When the Department of Public Information (DPI) arrived on site, the water level was high in the trenches and already covered some low-lying lands, but the quick response stopped the water from inundating residential lots.

Estate Manager of GuySuCo, Yudistir Manna recalled that his standby team, after receiving the call from the region, quickly mobilised materials and were dispatched to the site to commence emergency work.

“The koker door was under repairs but the magnitude of the waves penetrated the door and caused the problem. Nonetheless, we responded in a timely manner and thankfully no home was flooded nor any loss of property or lives [occurred],” Maana said.

Satnarine Rambajue, a resident from Anna Catherina, praised the agencies for their timely response and noted that the community is very grateful. “We became very frightened because the water was coming in at a fast rate and was rising high very quickly in the trenches. I personally was scared for my livestock and cattle, but when I saw three tractors and trailers with timber and workers, I was a bit relieved. The region and GuySuCo did well for us, and I believe the entire community is thankful.”

A similar situation of this nature occurred a few weeks back at Zeelugt on the East Bank of Essequibo and quick response from the Region 3 team also averted what could have been a major flood.

In light of both events, REO Ferreira-Dougall and Yudistir Maana from GuySuCo have undertaken to examine all koker doors in the region and remedy the potential faulty ones to prevent any reoccurrence of this nature.