Several Canadian and Guyanese businesspersons shared an evening of social networking for cooperation in various businesses, at a reception on Tuesday evening at the Marriot Hotel. 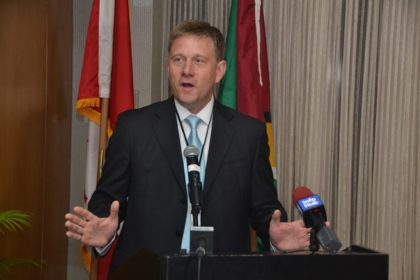 Michael Critch, Chair of the Newfoundland and Labrador Oil and Gas Association board of directors shares his experience with the gathering.

The Canadian Trade Mission currently in Guyana is comprised of more than thirty entities from the private sector, industry associations’ government departments and educational institutions from Newfoundland/Labrador Provinces.

Canadian businessman Michael Critch, who previously worked for major oil and gas companies and is now the owner of two successful businesses (which provide services to the industry) and Chair of the Newfoundland and Labrador Oil and Gas Association board of directors shared his experience gained after 25 years in the industry.

“Twenty-five years ago, I was a university student with no prospect for a job because our economy in Newfoundland was in pretty rough shape with a fishery that was going into a moratorium state and no potential prospect for economic prosperity in our future. But…here I am today. I’m an elected volunteer of an oil and gas industry chamber of commerce and board of directors, and I’m down here sharing some experience that I have obtained over the past 25 years with you”

Executive director of the Newfoundland and Labrador Environmental Industry Association Kieran Hanley addressing the prospects of such a mission that go beyond just oil and gas said, “Our membership is active in many other sectors from mining to forestry, to education and training, to waste water management.”

PAL-Aerospace Representative Jason Conelly disclosed that the delegation has received positive feedback from engagements with potential companies. He also mentioned there are plans to partner with local companies in aerospace and environmental markets since it has a “bright future.”

Guyana Office for Investment’s (Go-Invest) Chief Executive Officer Owen Verwey, making a presentation on behalf of the Minister of Business, shared his optimism regarding the mission. He opined that a possible achievement of the trade mission could be a company “born in Guyana and exported out of Guyana to provide the same services in the international oil and gas industry”

According to Head of the Private Sector Commission in Guyana, Vishnu Doerga, the event allowed for connections to be fostered among investors, businesses and interested persons. He noted, “We can’t wait until the day one of oil arrives we need to make these connections.”

Canadian Charge De Affairs to Guyana Jan Sheltinga noted as the country prepares for the next phase of economic development they will continue champion responsible development in anticipation of years of progress. 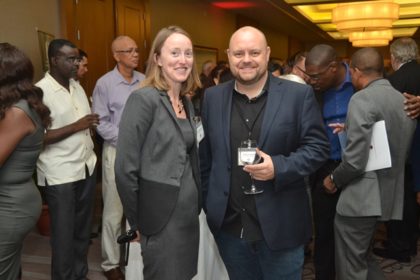 Mission Consultant Amber Mackereth and Jason Connolly a member of the Canadian Mission delegation take time out for a photograph. 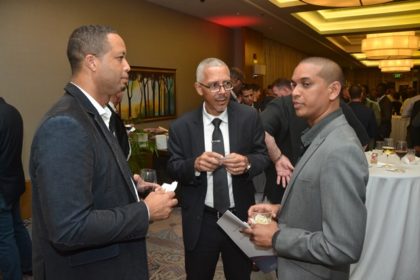