“Chile has played an integral role in the South American body”, stated Prime Minister Moses Nagamootoo, who is currently acting as Head-of-State. 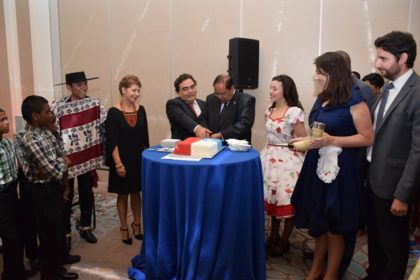 The remarks were made at a ceremony hosted by the Chilean Embassy, at the Marriott Hotel to observe the country’s 207th Independence Anniversary. The Acting President lauded the Chilean Government for the progress made on bilateral relations between the two countries.

Present at the event were Ambassador Chile to Guyana Claudio Rachel Rojas, Minister of State Joseph Harmon, and other dignitaries.  Invitees were treated to traditional Chilean dances, food, art, and wine.

Prime Minister Nagamootoo stated that “I am confident that in the years ahead we will continue to build on the foundations of the fruitful relations between our two countries”. Adding, Guyana is “pleased that our bilateral relations have become increasingly active since the commissioning of the Chile embassy in 2015.” The Prime Minister reminded that in 2016 President David Granger and Chilean President, Michelle Bachelet, met at the 37th Regular Meeting of CARICOM Heads, and began exploring ways to improve co-operation between the two nations.

“Guyana is extremely appreciative of the progress made by both sides on the commitment of His Excellency Granger and Chile’s president during their encounter in 2016”, the Acting Head-of-State remarked.

Claudio Rachel Rojas, Ambassador of Chile to Guyana, highlighted the development of the relationship and bilateral cooperation over the years, “We have building blocks little, by little, to try and work to build a bridge and with that bridge we can join each other’s efforts to make sure part is part of our community South American community”.

In October 2016, the Chilean Government inked the Open Skies Air Services Agreement and the Reciprocal Visa Abolition Agreement. The agreement was signed by Minister of Foreign Affairs, Carl Greenidge and Chilean Foreign Minister, Heraldo Muñoz in the presence of President David Granger and President Michelle Bachelet of Chile. The Citizens of both Guyana and Chile can also travel “visa-free” between the two countries, with the launch of Guyana/ Chile Visa waiver programme.

Ambassador Rojas also pinpointed some of his government’s efforts geared towards building the capacity of Guyanese – partnering with the Guyana Geological Mines Commission for geological mapping project; launching a technical assistance project for food safety; conducting a Spanish language course for public servants; and a programme in globalization and challenges the phenomena has imposed on countries.

The Ambassador noted that though Chile’s general elections will be held on Sunday, November 19, 2017, diplomatic relations will continue with Guyana.

An award was also presented to Chile’s Honorary Counsel Dr. Yesu Persaud. The veteran entrepreneur is the first recipient of the award by the Chilean Embassy, that honours persons and companies who have contributed to the strengthening of Guyana- Chile relations. 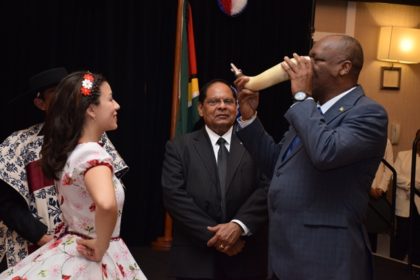 Minister of State Joesph Harmon partaking in some of the traditional Chilean wine in a horn. 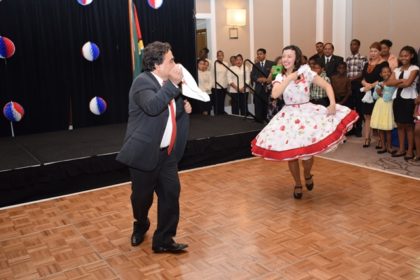