The Central Housing Planning and Authority (CH&PA) is examining the regularisation of portions of land at Plantation Great Diamond, East Bank Demerara occupied by squatters. 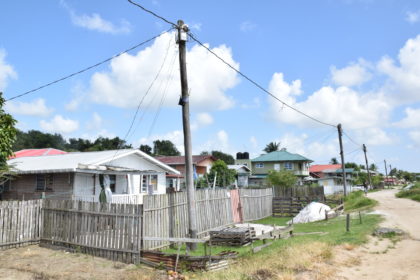 A portion of the land at Plantation Great Diamond, East Bank Demerara occupied by squatters

Minister within the Ministry of Communities Valerie Adams-Patterson and a team of CH&PA officials including the Chief Executive Officer (CEO) Lelon Saul visited the area today, to address an ongoing squatters’ issue with the residents. During the visit the minister put forward the option of regularisation of a portion of the households, and relocation of others.

“When I spoke with you guys, my initial reaction was to relocate, now that I come here and I see the quality of the homes then I realise that’s a difficult task, and we have to go back to the drawing board. I have, my CEO and myself, we see what we have here. I can say right off it is not easy to relocate, so it might be possible that we would have to call Toolise (Persaud) in and negotiate on your behalf,” the minister told the residents. 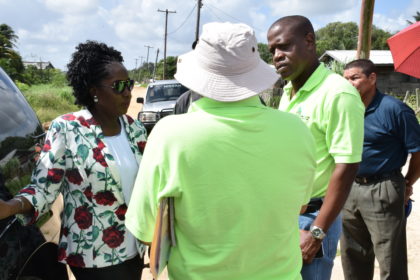 Minister within the Ministry of Communities, Valerie Adams-Patterson and staff of the Central Housing & Planning Authority at the land at Plantation Great Diamond, East Bank Demerara

The Minister committed to meeting with the squatters in two weeks’ time, when decisions, including who would be relocated and who would remain, would be made.

Lucian Pierre on behalf of the squatters welcomed the move to address the problems. “I just want to take the opportunity on behalf of the residents to thank you for coming and we are looking forward for further negotiation,” Pierre told the minister.

He said that this was the first time that the substantive Minister with the responsibility for the housing sector would have visited the area with the aim of addressing the issue. “With all due respect we had Mr. (Anil) Nandlall come here, but he came here around election.  I guess that was for vote.  We had two representatives came here from Freedom House. I guess that was for vote, but you as a substantial Minister in the Ministry coming here to listen to our concerns, so I want to thank you for that opportunity and I guess that at the end of the day with the guidance of God we would be able to trash it out, and at the end of the day everybody will be happy,” Pierre told the minister. 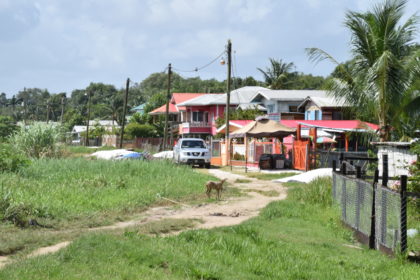 Another section of the land at Plantation Great Diamond, East Bank Demerara occupied by squatters

The 12-acre plot at Plantation Great Diamond is owned by Interior Forest Industry Limited (Toolsie Persaud Limited) via transport dated 1981. However, approximately 73 households or 284 persons have occupied the area for the past 37 years. The area is supplied with electricity and water.

Community representatives and Toolsie Persaud Limited officials, recently met Minister Patterson as part of efforts to resolve to the long-standing issue.  Persaud, who bought the land from Demerara Sugar Corporation, has been insisting that the squatters move. According to the CH&PA CEO, however,  Persaud has also indicated that he is open to negotiations on the issue. One of the alternatives that  Persaud has put on the table is being supplied by the government with alternative land.

In the past, community representatives approached the CH&PA with regards to the regularisation of the area, however, because the area is privately owned and the occupiers face possible eviction, CH&PA did not proceed with the regularisation process.