Commonwealth Games Gold Medalist Troy Doris paid a visit today, to the office of Minister of Social Cohesion Dr. George Norton, where he was presented with an award for his excellent performance. 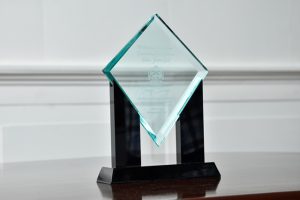 The award given to Troy Doris.

Doris shared his excitement to be in his parent’s home country, “It’s really a great honour to be here, to enjoy and really celebrate this accomplishment. That link that I have (with Guyana) and now being here with the people of Guyana, it just extends that joy a little bit further.”

Doris also noted that his journey to success required a lot of effort and dedication and although there have been accomplishments, there were also disappointments. He added that he is no longer competing for personal glory but for the country and would appreciate all future support.

“I do need a significant amount of help from the government, from sponsors, from anyone who’s willing to support me to fulfil my dream because this is the platform that I’m using. It is no longer for me, it is for the country of Guyana and I need huge support to achieve this”, Doris remarked.

Minister Norton disclosed that he has been mandated by Cabinet to create a policy to compensate athletes who excelled in their disciplines. This, he said, must be done in a structured way and it will take into consideration measures other Caribbean countries implemented to compensate their top performing athletes.

The minister reassured Doris of the government’s commitment to him and other athletes. He stated, “You are serving as a role model, as an icon, as someone that our youths can look up to. In your efforts to prepare yourself for the Olympics, the administration is willing to contribute and we want it to be known that this administration is fully in support of the preparation activities of our sportspersons.”

Troy Doris is currently in Guyana for the country’s 52nd independence celebrations. During his stay, he will be conducting a series of courtesy calls on public officials including President David Granger. Doris will also attend the 52nd Flag Raising Ceremony at D’urban Park on Friday, May 25, 2018, as a guest of honour.

The Minister of Social Cohesion Dr. George Norton along with Troy Doris.