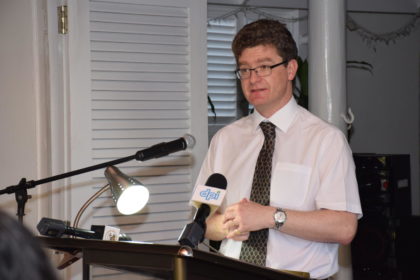 Approximately 70 persons will benefit from the Commonwealth Women’s Mentorship Scheme, 14 aspiring young women from Guyana will be matched with experienced professionals in fourteen fields.

Commenting on the programme, organiser Angelique Pouponneau, Vice Chair of the Commonwealth Youth Council, said that mentorship is essential for boosting the economic position of women. “As a young woman myself, I understand the importance of having someone to provide guidance and advice….to progress in your career.” 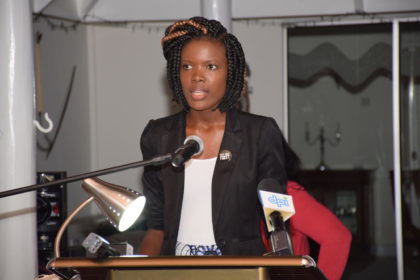 British High H.E. Commissioner Greg Quinn questioned the gathering in his opening remarks, “How can change be sustainable or beneficial, if half of the world’s population is excluded?” He spoke of his childhood, and how women played a vital role in his life; his sister and mother. The High Commissioner reiterated Britain’s commitment to “further the cause of equality and to advocate for this in Guyana.” He said he will “continue to condemn domestic violence which is prevalent in this society. So, gender discrimination is just as unacceptable as physical or emotional abuse.” Men must be educated, but women too, it should be reinforced that “there should be no barriers to what they can achieve.” 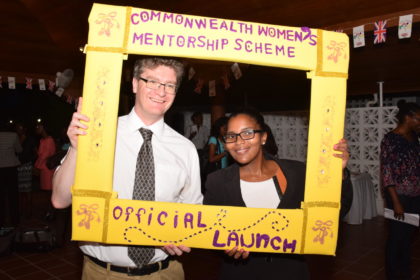 The mentoring project starts with a six-month pilot in the Caribbean and the Americas, and will include a small number of participants from Africa, Europe, Asia and the Pacific. It was opened to Commonwealth citizens between 18 and 29 who have demonstrated leadership and drive in their careers or in community projects.

Both the mentees and mentors were urged by High Commissioner, Quinn to ‘gain as much’ from the programme. Some of the mentees are Elon Alonzo, Devina Roopnarine, Chevaunne Perreira, Lisa Hussain, Sara Henry, Leanna Kalicharan, Kadija Murray, Shivanie Rampersaud Saunssey Profit, Satwanti Baburam, Loeta King.

Dr. Patricee Douglas, a mentee of the programme, explained that her volunteer group SRHR Adventures, which is an initiative that seeks to raise awareness of sexual and reproductive health and human rights, with a special focus on family planning and contraception in Guyana. 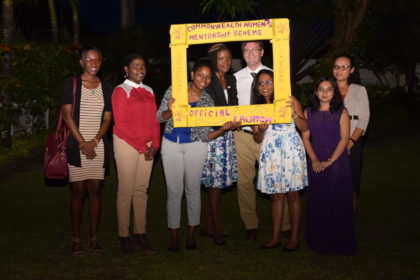 She explained that “you do not have to be rich, or have lots of money to make a difference,” her organisation is self-funded, with the aid of a grants that she won last year (120 Under 40 family planning competition). It was while doing a ‘Women Deliver Young Leader Programme’ that Douglas uncovered the statistics of unplanned pregnancy, and became passionate to alleviate this issue. She said “Guyana has the second highest rate of adolescent pregnancy in the Caribbean and South America; 97 out of every one thousand young ladies ages 15-19 become pregnant yearly,” Dr. Douglas stated.

The SRHR Adventures consists of seven young doctors, one medical student and a psychologist. They conduct interactive sessions on abortions, prevention of adolescent pregnancy, family planning and other related issues. The have also recently launched an awareness campaign for the HPV vaccine, Gardasil.

One of the mentor’s Elizabeth Cox said “It is important to ensure that the next generation is prepared to take on the new challenges that our world will face, they can benefit from our mistakes.” She has committed to aiding the mentee’s towards becoming successful entrepreneurs, and looks forward to sharing her experiences.

This mentorship programme has been designed to ensure that the wealth of people within the Commonwealth, who are willing to commit their time and experience share their knowledge with the younger generation towards achieving the Sustainable Development Goals (SDGs) 202, Pouponneau said.