Continuous labour survey to be conducted

Finance Minister, Winston Jordan on Monday, whilst delivering the 2017 National Budget to the National Assembly said that this Government has prioritised the undertaking of a continuous LFS, which will be launched in the second quarter of 2017, with support from the country’s development partners. 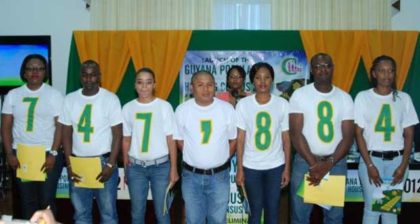 Employees of the Bureau of Statistics display the latest population count

The Minister said that, for too long, Government has “laboured in the dark, not knowing our rate of unemployment, or which demographic group requires greatest attention.” He said that the continuous LFS will allow for the Government to generate and disseminate timely data, especially in critical sectors such as health and education.

Minister Jordan said that the LFS compared to the Census, will collect data in a more detailed way, and with the highest level of regularity, “as it will be an on-going survey conducted over four continuous quarters.”

According to the Minister, already, preparations are underway for the continuous LFS. Minister Jordan said that personnel are being trained to capture data in the field, some of which will be done electronically for the first time.

Jordan said that over 80 persons will be trained by the end of 2017 in the use of handheld devices so that “all information previously collected on paper would now be collected electronically.”

The Finance Minister added that the datasets to be collected for the Survey include size, location, gender and educational profiles, occupational status and industry, age structure, and regularity of work.

The LFS is a monthly survey which measures the current state of the labour market. It is used, among other things, to calculate national and regional employment and unemployment rates. The survey results are used to make important decisions regarding job creation, education and training.