Georgetown, Guyana – (February 14, 2018) With today being the third anniversary of the signing of the Cummingsburg Accord, President David Granger said that the A Partnership for National Unity (APNU), which he leads, remains committed to coalition politics and said that there is no compulsion at this time for the Accord to be reviewed adding, however, that he is awaiting word from the Alliance for Change (AFC). The Head of State made these comments to the media after the swearing-in of Justice Rafiq Khan, at State House earlier today. 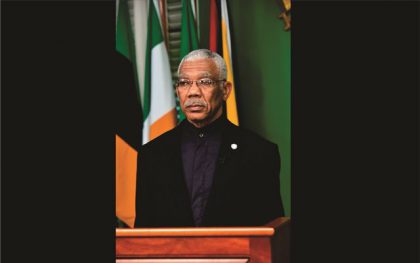 “The AFC has several options, it can allow the accord to proceed as it is proceeding at present, it can allow it to expire on 2020 or it can make a request for a meeting. The APNU is committed to coalition politics and I can say that the advent of the Coalition into Government has been good for Guyana. We are better together and we would like to see the Accord continue,” he said.

The President said that the APNU has held several meetings and is quite prepared to meet and discuss the way forward for the Coalition, particularly as it relates to the Cummingsburg Accord. “All I can say at this point in time is that there is no compulsion that the Accord be reviewed because the shortest period is three years, from 2015 to today and the longest period is until 2020,” he said.

Meanwhile, reacting to news of Prime Minister Moses Nagamootoo’s successful heart bypass surgery on Tuesday, President Granger said that the entire Cabinet was relieved to learn that he is already on the road to recovery. “The entire Cabinet was concerned naturally, even though people have come to regard that surgical intervention as being routine. We were deeply concerned and we wish the Prime Minister a speedy recovery and we look forward to him joining us again in Cabinet soon,” the President said.