The atmosphere at the National Cultural Centre was tense as Primary and Secondary schools in Region 4 battled for position in a stiff dance contest; on day four of the Children’s National Mashramani Competition.

Splashes of green, red, yellow, white and black flashed across the stage when the masqueraders showed off their rhythmic foot movement as the sounds of flutes and drums filled the air. 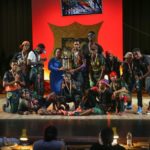 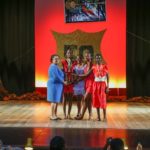 The audience revelled as characters such as Bam-Bam Sally, the Mad Cow and stilt man staged lively performances.

Morgan’s Learning Centre was dethroned this year by the ‘Graffiti Mob’ from The Bishop’s High School after they delivered a jaw-dropping performance that stunned students, teachers and judges during the Hip-Hop age 14-18 category.

Costumed in worn clothing that was spray-painted in varying colours, Graffiti Mob danced a medley of popular hip-hop songs that had the youth dominated audience out of their seats and demanding an encore. The auditorium fell silent for one heart-stopping moment as the all-male group built a twelve-man pyramid during their performance.

The Bishop’s dance team took home a well-deserved first place win. They were followed by the Government Technical Institute’s ‘Refuel Hip Hop’ in second position and Brickdam Secondary School’s ‘War of the World’ in third.

Coconut tree branches arched into the shape of a doorway, a man positioned in the entry, a bride walking gracefully on soft petals, the couple jumps a broom, these all formed part of the symbolic performance ‘Birth of a New Union’ by Queenstown Secondary. This saw them being awarded first in the 11-13 age group under the Legends and Traditions category.

To the surprise of the audience, the artiste himself appeared on stage and delivered an energetic performance though visibly injured and supporting his right leg on a crutch.

The celebrations continue tomorrow with the Physical Display and Costume Competition that will decide which other schools make it to the national level.

On Friday, February 7, Nursery Day of Activities is scheduled and will include costumes, dance and poetry.

Today’s winners from first to third according to the categories are as follows: