Tassa drumming is an art form, which is Indigenous to this country’s tradition, showcasing pulsating rhythms. Like so many of the other genres of music, tassa has evolved through the years. Drummers have experimented with several modern rhythms and are now able to bring these changes to the stage.

The tassa is a bowl-shaped drum that is hung from the neck and played with two thin and very flexible sticks. In some countries, tassa is always accompanied by the dhol (a double-headed bass drum played with one stick and one open hand) and jhal (a pair of thick brass hand cymbals). It takes at least four players to play all the parts of the ensemble. The “cutter,” or lead tassa player, directs the ensemble through a series of standardised taals, or rhythmic calls. Additionally, the cutter adds flair to the music through improvisation, often using rapid-fire rolls and ear-splitting “shots.”

The foulé is the accompanying tassa part that consists of standardised ostinato patterns. The bass, jhal, and foulé provide a rhythmic base upon which the cutter improvises. Tassa rhythms are called “hands” and vary greatly, ranging from processional hands played at a moderate walking tempo to very fast, upbeat hands meant for dancing. The drums are not necessarily sacred but are important for Caribbean Hindu weddings and for the Shi’a Muslim Hosay observance (the local name for Muharram). Tassa is also played for Carnival celebrations, parties, and cultural events of all kinds.

Region Three has a well-known Tassa group called the “Dynamic Tassa Troupe” which has its groundings in the Windsor Forest Arya Samaj Mandir, West Coast of Demerara. These talented players believe that “music has always been one of the finest forms of art” and that tassa drumming “pushes the boundaries of all rhythms”.

It all began with three brothers when their first sets of instruments were gifted to them by Thribuwan Jaimangal (also known as Latcho) who is their Chacha (East Indian name for uncle) from Trinidad in 2009. He saw their love for music and drumming and took the initiative to present them with the instruments. From 2009-2013, two of the founding members Navindra Jaimangal and Chanshekhar Jaimangal started playing their newly gifted instruments at family weddings, mandirs, cultural programmes and other small venues. 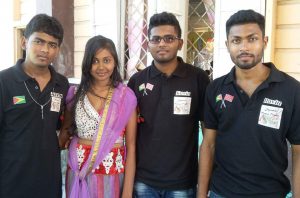 The three founding Jaimangal brothers with their sister 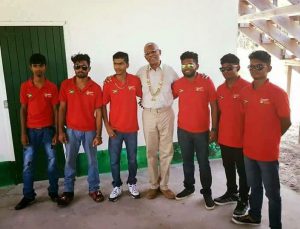 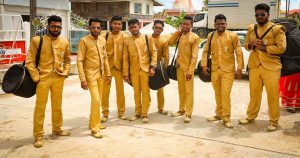 The group heading on a play out 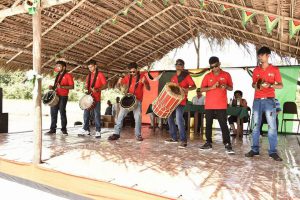 The group enjoying the stage

In 2014, Navindra and Chanshekhar were joined by their other brother Chanderpaul to officially launch the Dynamic Tassa Troupe and immediately began expanding the group. The first new recruits to the group were Deepak Rupchand who became one of the main dhol player, Jagdeo Persaud who was trained as a  foulé, Stephon Sugrim, Mohan Singh and Raymond Khan were all trained to be master class players of the jhal and other accompanying instruments (Tambourine, etc.), Subhash Haimraj joined and became firstly their personal photographer but then later was trained to play one of the dhol, while Vishal Hemraj joined in trying to mix his flamenco guitar styles to the tassa. Deopaul Somwaru started off as their advertisement manager, and eyes capturing the special moments and promoting them on Facebook and other sites. He then took up the challenge of playing the jhal and excelled in it.

Presentation is one of the most important features of performing. Raymond Khan also became the troupe’s fashion designer, ensuring they are always presented professionally at functions even covering the cost of their costumes. “We owe him a lot because, if it wasn’t for his generosity we would’ve been just another group playing tassa.” said the group leader, Navindra.
With hours dedicated to practice, the troupe developed and mastered their skills while continuously building their repertoire through fresher beats, sounds and mixes. The Dynamic Tassa Troupe have stormed across the Essequibo Islands-West Demerara performing at weddings, fundraisers, religious functions and other places of worship, Diwali motorcades, Digicel CPL Cricket, Miss Earth Guyana and other national events.

“We don’t consider ourselves better than any other tassa troupe, but we are very true to the importance of the traditions that come with tassa drumming especially the religious aspects of it. We also do a lot of voluntary work through which we made lots of friends and new clients. We also have a high customer satisfaction rate, we normally bond with our clients like our own family,” Subash Haimraj said.

He also disclosed that the troupe conducts training sessions for youths at the Meten-Meer-Zorg Mandir where they share their skills and knowledge with the next generation of tassa players.
Members of the troupe are appreciative of the continuous support and guidance of their parents, members of the Windsor Forest Arya Samaj Mandir.  They also grateful to ‘Chacha Latcho’ whose investment gave them the start they needed and the Region Three Democratic Council for helping to bring them to where they are today.

The Dynamic Tassa Troupe has become a household name in Region Three and is proving that young people once focused can set and achieve goals. The troupe plans on announcing the name of a 10th or before Diwali this year.

Story and Images by Ganesh Mahipaul

Editor’s Note: In music, an ostinato is a short pattern of notes which is repeated many times.