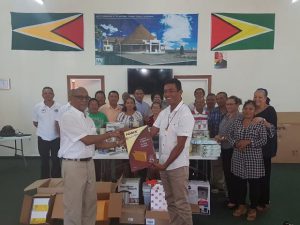 These were handed over at the NTC Secretariat, Hadfield Street, to the Executive by the FCPF-REDD+ Project Execution Unit of the Ministry of Natural Resources. The supplies are part of the FCPF-REDD+ Institutional Strengthening and Capacity Building Support to the NTC, a national representative body for indigenous people.

Receiving the items, NTC Chairman Nicholas Fredericks, thanked the FCPF-REDD+ Project for the support and partnership, which he said, is helping the Council to execute its mandate. “We see this as an important aspect in the development of the NTC,” he said, adding that it positions “the NTC to function in the direction which it is supposed to be heading.”

The FCPF-REDD+ Unit will soon provide the NTC with the remaining office furniture, computers and other IT facilities as well as VHF radio communication equipment. The REDD+ Project already supports rental of the building that houses the NTC Secretariat, two key staff members and several capacity building sessions with the NTC executives.