The second phase of the sea and river defence project at Friendship, East Bank Demerara, that will extend the project by 120 metres, has commenced. The extension starts from Friendship and heads north.

Senior District Engineer, Sea and River Defence Department, Ministry of Public Infrastructure, Maitland Stewart told the Government Information Agency (GINA), that the first phase of the project commenced in 2014. He said 375 metres of rip-rap work were done on the sea and river defence adjacent to Garden of Eden. 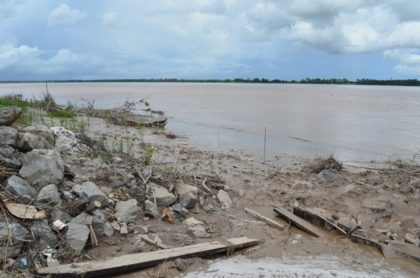 Mangrove and vegetation destroyed at Friendship sea and river defence

The team of workers, Stewart pointed out, has already cleared the area and is ready to commence work. The project will see the construction of rip-rap sea defence with timber pilings (timber toe) being used to stabilise the structure and a rock armour slope. “The contractors will use a timber revetment; a timber toe, then they’ll come up with the armour layer, armour surface protection, then do the earthen embankment,” Stewart explained. 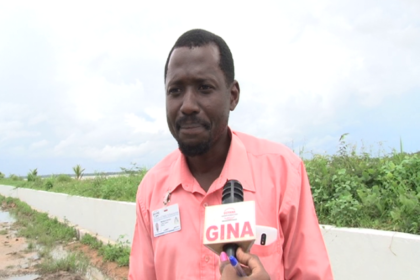 Toe pilings are sharpened poles driven next to the upstream face of the mudsills of a dam or sea and river defence to prevent water from seeping under the foundation. Armour toes are rocks used for river revetment.

Earlier in the year, the Ministry of Public Infrastructure received bids for major construction of rip-rap sea defence at Friendship. The project is being funded to the cost of $50M from the ministry’s 2016 budget, and is expected to be completed within the next six months.

The extension comes in wake of the loss of the natural sea defence. “We have lost most of the natural defences such as mangrove …due to erosion … so we’re putting in a new permanent structure and rip-rap is the most plausible solution for the condition we’re in right now,” the engineer explained. 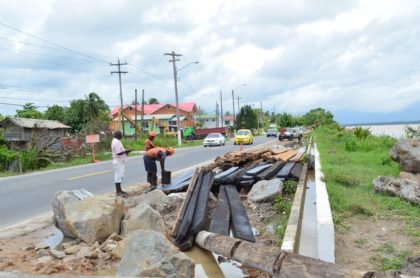 Contractors working on the Friendship sea and river defence project