GNBA licences should be used to benefit all Guyanese- PM Nagamootoo

Prime Minister, Moses Nagamootoo has urged the Guyana National Broadcasting Authority’s, (GNBA) new Board of Directors, to ensure that the licences the board issues are used for the benefit of all Guyanese. The Prime Minister cited the need to boost awareness of the need to protect the nation’s sovereignty and its new found resources. 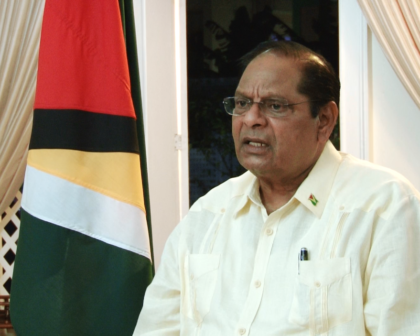 On Wednesday, the GNBA’s six-person board was sworn in by the Prime Minister at his official residence on Main Street. During the ceremony, Prime Minister Nagamootoo said the new board must be able to ensure that Guyanese are not contaminated by propaganda, but be instilled with information that will bring unity.

“Not everyone who runs around with a camera or with a microphone in their hand will be entitled to become a licencee of that strategic resource, so it has to be used beneficially for our nation particularly when we are being challenged by a neighbouring country that claims ownership of five-eighths of our country,” Prime Minister Nagamootoo explained.

The new board will serve for two years. The Prime Minister noted that the previous board experienced some difficulties along the way, but this new board must not look at the past, but ensure that they function in an acceptable manner.

He said that even though there is respect for the different ethnicities and backgrounds, “we are all enthusiastic that we in Guyana can one day have modern digital communication that links our people particularly in a diverse way… We have to be able to use communication to bring us all together, to mould us, not forever being six peoples, but being one Guyanese.”