The Guyana National Bureau (GNBS), which is under the purview of the Ministry of Business, is currently in the process of adopting the CARICOM Regional Standard Specification for Poultry and Poultry Products as a National Standard. This standard, which will be made mandatory, will ensure that specified poultry meats, whether imported or locally produced, are meeting requirements that guarantee wholesomeness for public consumption.

Public Relations Officer (PRO) for the GNBS, Lloyd David said that the standard, was developed in 2012, under the authority of the CARICOM Regional Organisation for Standards and Quality (CROSQ). This new poultry standard gives regulatory oversight of poultry and poultry products in the Caribbean and it is necessary to facilitate trade of this commodity among Member States of CARICOM, David said. 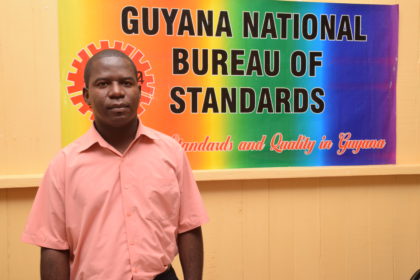 David explained that the requirements of the standard provides guidance to the industry on the sustainability of poultry processing whilst allowing the growth and development of small and medium sized enterprises. He noted when adopted and implemented, the standard will also serve as a catalyst for the improvement of the quality infrastructure associated with poultry processing.

“In other words, aspects such as testing, certification, labeling and measurement will become integral parts of the production process. In addition, the Veterinary Public Health Unit, as the competent authority, will be able to comprehensively monitor poultry meat production in Guyana according to the requirements of the standard”, the PRO said.

The scope of the poultry standard covers requirements for primary processed poultry consisting of carcasses, poultry parts and poultry products for human consumption. It defines and distinguishes between the market classes of poultry. The standard includes requirements for sanitation, plant hygiene, the dressing operation, grading, packaging, labeling and marketing as well as ante-mortem and post mortem inspection of poultry products sold through commercial distribution systems. David explained.

However, David said that the standard does not apply to freshly killed poultry prepared for direct sale to consumers and for which conditions may be prescribed in National Regulations.

David said the standard will auger well for users and the economy as a whole. He noted that with its implementation, the local poultry industry will be able to benefit and grow, “as produce will not only be limited to the local market but also can be sold to any member state within the CARICOM Region.” Consumers are also expected to benefit, he added, with improved quality of products through the grading scheme, and education through the information outlined in the standard.

The standard is currently at the public comments stage of the standards development process which will come to an end on March 31, 2017. This stage allows stakeholders in the industry to peruse the document to develop a clear understanding of the requirements contained in it.

The GNBS recently hosted a public consultation session on the standard to provide detailed information to stakeholders, and to garner feedback.