Residents of Mahdia Region eight were reminded that the government has spared no effort in developing hinterland regions. This was recalled by Minister of Communities Hon. Ronald Bulkan during a rally.

The Minister recalled that prior to 2015, the Potaro-Siparuni was in a disgraceful state.

“Pre 2015, Mahdia was called a landing, it is now a town on the move. A town that is empowered with its own elected mayor and councillors. One that is no longer subject to the dictates from a Minister from Georgetown. Pre 2015 this region and town were neglected, now this region and town are on the move,” Minister Bulkan told the gathering at the Mahdia Oval. 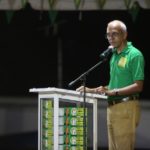 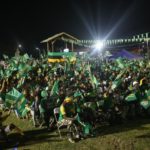 A section of the crowd at the rally at the Mahdia Oval in Region 8.

The Head of State has a plan for the region that will ensure no one is left behind Minister Bulkan said.

“It is not only the Potaro-Siparuni that is moving forward, all our regions, especially our hinterland regions… President Granger plan for a strong Guyana is based on strong regions. His excellency has made it clear that Guyana is one country and each citizen regardless of whether they live on the coastland or hinterland must have access to quality public services. For this to be achieved we need strong regions that would assist in the delivery of these services to their residents.”

This plan he observed is already being realised with unprecedented levels of development in hinterland regions, more specifically, Mabaruma, Bartica, Lethem and Mahdia.

He referred to Mahdia’s billion-dollar internal road network; the $114Million Moruca Bridge in Santa Rosa Region One; the $100Million Bina Hill Green Institute which is providing valuable training to youths in Region Nine and access to potable water throughout hinterland communities.

Additionally, the Minister noted that free WIFI is available to over 100 hinterland communities, radio stations established in hinterland regions, several of hinterland airstrips have been resurfaced, upgraded and extended and over 16 bridges in Mahdia alone have been rehabilitated.

The Communities Minister reminded that before 2015 Region Eight received $944Million, however by 2019 the regional budget rose to over $40Billion which signalled an increase to over 4o percent.

The increased budgets have allowed for investments in education targeting students with the construction of several schools and ensuring teachers are trained. Several health centres including the Mahdia Hospital have undergone massive upgrades

“This is not a gaff; we have the evidence… the sincerity of this administration is evident in the five budgets that we have presented,” he underscored.