─ in keeping with Minamata Convention

Adhering to its August 2019 deadline, the government, through the Ministry of Natural Resources, signed a Memorandum of Understanding (MOU), for the management of the importation of mercury into Guyana.

This MOU will work to protect human life and preserve the environment said Minister of Natural Resources, Hon. Raphael Trotman, who has responsibility for the mining sector in Guyana.

“The journey to a mercury-free Guyana is a long but necessary one,” he stated.

The MOU was signed between the Ministry of Natural Resources, the Guyana Geology and Mines Commission (GGMC), the Environmental Protection Agency (EPA) and the Pesticides and Toxic Chemicals Control Bard.

“By working collaboratively, we will create a platform to build synergies and leverage resources for the national implementation of the Minamata Convention as we proceed and progress on our green state trajectory,” Minister Trotman assured. 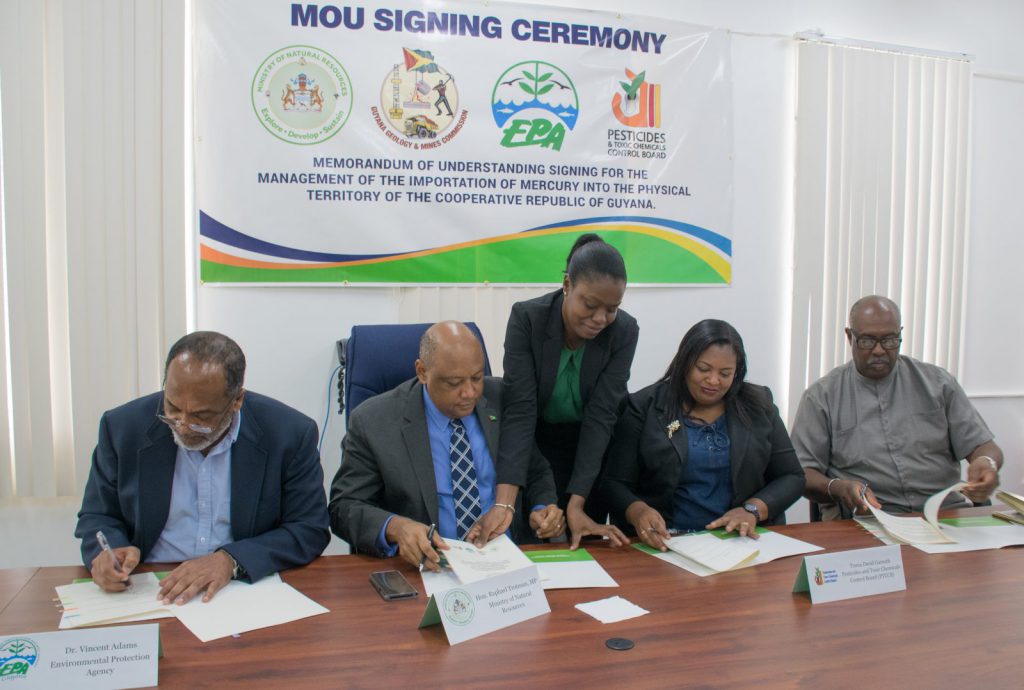 The Natural Resources Minister noted that regulators were still on that pathway of making mercury history in Guyana.

“The government is steadfast as we continue to preserve and keep the momentum of creating a safe and clean environment to protect the lives and livelihood of our people by addressing the dangers of mercury use.”

The Minamata Convention on Mercury is an international treaty designed to protect human health and the environment from anthropogenic emissions and releases of mercury and mercury compounds.

Meantime, responding to reports of mercury being filtered through Guyana to other countries, Minister Trotman assured that the national registry to be created through this MOU would act as a safeguard against such activities.

“There are stories… and some evidence that some of it is moving across borders… [but], the cumulative effect of having the GGMC Mines Officer, inspectors from the Pesticide Board, EPA Officers and the core wardens working in tandem with the police, will give us greater impact,” he said.

According to the World Health Organisation (WHO), mercury, also known as quicksilver, and most of its compounds are extremely toxic. Inhalation of its vapour will result in harmful effects on the nervous, digestive and immune systems, lungs and kidneys, and may be fatal in some instances.