The report of the Commission of Inquiry (CoI) into the discovery of a twin-engine Cessna 441 Conquest II plane on September 14, 2016 in Yurupukari, Region Nine, has found among other things, that several residents in the area along with unknown persons were complicit and that there was a lack of adequate communication between residents and the police and military.

This was confirmed on Friday by State Minister, Joseph Harmon during his post cabinet press conference. The Minister said this has led to Government re-examining the system of operation by the Guyana Police and Defense Forces in far flung areas. 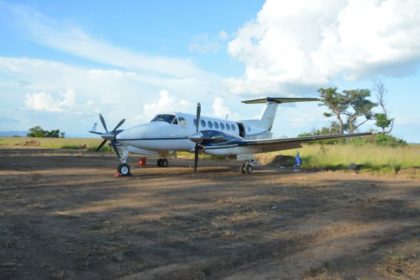 The twin-engine Cessna 441 Conquest II plane that was discovered in Yurupukari, Region Nine

“We’ve made some changes at the senior level of the Guyana Police Force in the region and we have actually looked at the way the police and the army patrol those communities,” the Minister disclosed.

To improve the communication channel to the central command centre, the Regional and District Intelligence Committees have been reestablished and comprise citizens in the community, police and military officers, as well as the administrative representatives in the region. “So when they [District Intelligence Committee] meet on a fortnightly, sometimes monthly basis, they would have a collaboration of information. That information would be collated and sent up to the next level, which is what we call the Regional Intelligence Committee and that is held by the regional chairman and the officers in the region,” Minister Harmon said.

He noted further that in the past there was a break in communication because the Village Intelligence Committee seldom met and information was only shared when a patrol visited that community and within that time numerous activities were occurring.

The State Minister said most of these measures were implemented as a direct result of the recommendations of the CoI report.  He has assured that the administration is making every effort to better equip the security forces and strengthen their capacity to secure Guyana’s territory.

The inquiry was conducted by former Chief-of-Staff of the Guyana Defense Force, Retired Brigadier, Edward Collins, and was established in September 2016 to examine, advise and report on all circumstances under which the twin-engine Cessna Aircraft bearing the fake United States registration number; N767Z entered into the country.