─ 6 regional radios in the Hinterland

─ youth are being trained from respective communities to serve as broadcasters and deliver programming focused on development, health, agriculture, culture, history and traditions as well as a round-up of all things local within their communities

As World Radio Day 2019 is observed, Guyana is not only marking the revival of radio as an instrument for dialogue, information sharing, tolerance and peace, but also celebrating a historic development in Guyana.

A year after the Coalition Government assumed office, six regional radios have been established in the hinterland region and a seventh is slated to be commissioned shortly in Essequibo.

These community radio stations and others that will be added by Coalition Government in the coming months, have the potential to inform, 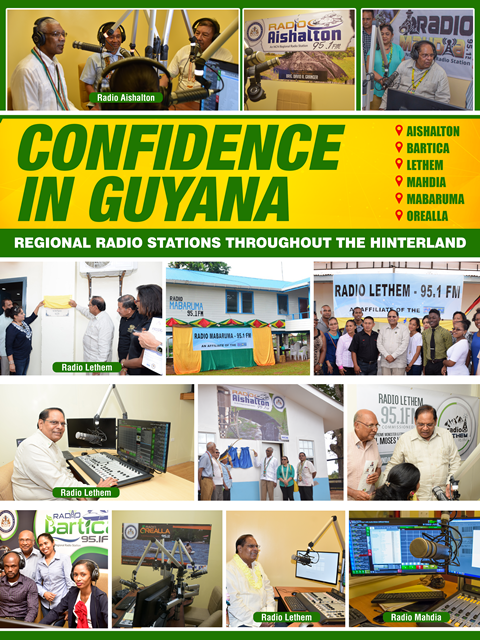 engage, transform and unite communities in various parts of Guyana, for the development of their region and the country as a whole.

“Our APNU+AFC Coalition Government wanted our hinterland regions to know what’s happening in Georgetown and on the rest of the coast. Our radio stations provide food for the minds, for the intellect of our hinterland residents. They nourish them with information, education and entertainment, and feed their appetites for relaxation and leisure with diverse cultural programmes,” Prime Minister Moses Nagamootoo said during a recent visit to Radio Aishalton.

The government considers connecting communities across Guyana as vital to improving people’s lives and creating more opportunities for them, and has already connected many communities in Upper Takutu-Upper Essequibo (Region 9), through the establishment of Radio Lethem, in May 2016, and in Barima-Waini, (Region 1) with the setting up of Radio Maburama, in June 2016. The Office of the Prime Minister commissioned Radio Mahdia, Potaro-Siparuni (Region 8) on October 8, 2017, Radio Bartica in Cuyuni-Mazaruni (Region 7) on November 17, 2017, Radio Aishalton in Upper Takutu-Upper Essequibo (Region 9) on February 17, 2018 and Radio Orella, East Berbice-Corentyne District (Region 6) on March 25, 2018. The Office of the Prime Minister also recently upgraded Radio Paiwomak.

While the establishment of these radio stations is key to ensuring that the hinterland communities are brought into the mainstream through access to information, they will also help to boost culture, sport and business. To this end, the government is training youth from among the respective communities to serve as broadcasters and deliver programming focused on development, health, agriculture, culture, history and traditions as well as a round-up of all things local within their communities.

The established hinterland radio stations are all affiliates of the National Communications Network (NCN) and broadcast on the national frequency.

The Guyana Broadcasting Corporation (GBC) was officially inaugurated on May 1, 1979, following the acquisition by the Guyana Government of the assets of Radio Demerara. Subsequently, Channel One became Radio Roraima (RR) and Channel Two was renamed Voice of Guyana (VOG). The FM service 98.1 went on the air in October 1998.