Guyana’s 2018 Commonwealth Gold medalist, Troy Doris this evening made his much-anticipated visit to Guyana. Doris was invited by the National Sports Commission to visit the country during Guyana’s 52nd Independence anniversary celebrations 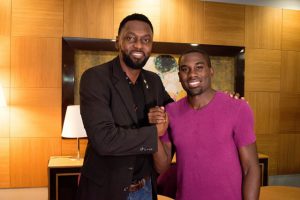 Born in Chicago to Guyanese parent Doris placed eighth at the 2012 U.S. Olympic Trials in the triple jump before deciding to compete for Guyana. Doris was Guyana’s flag bearer at the 2016 Summer Olympics closing ceremony. Having won the Commonwealth gold medal in the triple jump, Doris has moved from ninth position all the way to the top.

The elated Doris told media operatives that transitioning from  a representative of the United States to one for Guyana has created many opportunities and opened doors for not only him but Guyana.

“The announcers in the United Kingdom are now saying ‘Guyana’ and it’s putting a lot of honour on Guyana. It feels great to know that the entire country is celebrating. It was something that I didn’t plan for but it means a lot to have something significant like this to happen because it’s setting the tone for the future,” the gold medalist noted. 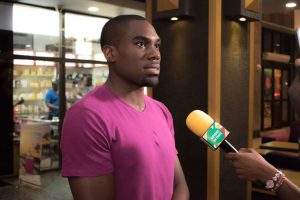 Doris noted that his success is due to dedication and hard work. He trains as much as six days a week and though it is time-consuming and costly, he is enjoying the rewards.

Director of Sports Christopher Jones said this accomplishment is a major boost for the local Sports sector. He lauded Doris Troy for his outstanding performance and reaffirmed the government’s commitment towards supporting local athletes.

“Troy achievement has placed Guyana on the world map and is a testimony to what can be achieved by our athletes with hard work and dedication. As a government we understand our responsibility to our athletes and Troy’s presence is to reiterate to particularly our athletes that even though resources are scarce the government still intends to contribute towards their development,” Jones underscored.

Doris will be a special guest at the National Sports Commission’s sports award and dinner on May 22. He is also scheduled to make several courtesy calls.