“It’s not unlikely we have to make a determination of what needs to be done and whether Mr. Hutson himself feels that he is up to executing these tasks,” the Minister told the Government Information Agency (GINA), today. 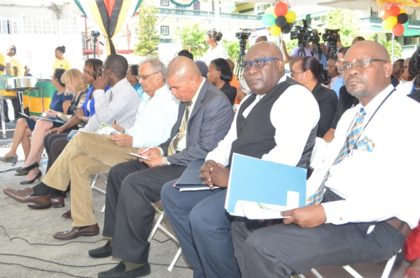 Questioned about the reasons surrounding the non-renewal of Sam’s contract, the Minister explained that the decision was one aimed at ensuring the proper execution of the Ministry’s policies.

“It’s not a shift in policy; it’s a reinforcement of policy …. It’s just that we want to ensure that the CEO is in fact carrying out policy directions of the ministry. There were some areas where we had complaints from teachers and that kind of thing… they were credible enough for one to question whether or not this is the right person for the job,” Minister Roopnaraine explained.

Further, the minister said the continued presence of the former CEO, at the Ministry of Education, despite previous announcements of his departure, is to allow him the full benefits of leave which would have accumulated over the years.

In January 2011, Sam was appointed the CEO following the retirement of Mrs. Genevieve White-Nedd who acted for more than five years without confirmation.