Senior Superintended and Crime Chief Wendell Blanhum said investigators have been taking all the appropriate steps to expedite the investigation into the alleged plot to shoot President David Granger. 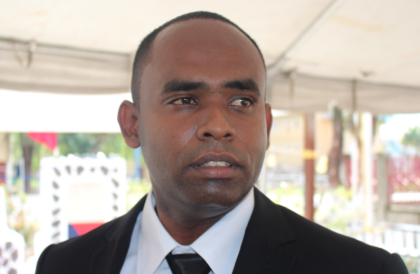 Speaking with the media today, the Crime Chief explained that the investigation department today returned the case file to the Police Legal Advisor and that she indicated to them that they needed to obtain the telephone records of two individuals.

“I spoke with the telephone company, and I indicated to them the urgency (of getting the records),” he said, adding that the department expects to receive those documents before the end of the day. “We are expecting to have those records by 3:30 this afternoon, then, we are going to do an analysis and the first thing next morning we are going to send that file back to the police legal advisor for her legal opinion,” he said.

On April 20, Minister of State Joseph Harmon disclosed at a post-Cabinet press briefing that Cabinet and the Guyana Police Force (GPF) were aware of a reported threat made against President Granger’s life. The Minister gave this answer in response to a question posed by reporters about the claims of a plot to shoot the Head of State for a bounty of $7M.

The media was informed that the threat, which was discussed at the last Cabinet meeting on April 18, has garnered the attention of the GPF which had launched an investigation. The Minister had also stated that legal advice from the Director of Public Prosecution’s Chambers has also been sought on the issue, but declined to give further details, noting that an investigation was already underway.