IOM and Government to strengthen collaboration

Representatives of the International Organisation for Migration (IOM) today met with Minister of State, Joseph Harmon in an effort to strengthen collaboration with the Government in areas of mutual interest. 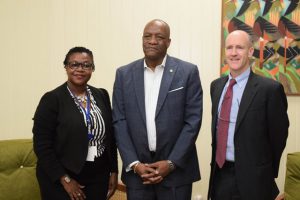 Discussions also focused on how the IOM could better support the Government on migrant issues. Minister Harmon restated government’s commitment to working with the organisation.

IOM, last September through funding, facilitated discussions towards Guyana finalising diaspora policy.  It also financed consultations in the diaspora, the results of which were used to develop the initial draft diaspora policy.

The IOM is an intergovernmental organisation that provides services and advice concerning migration to governments and migrants, including internally displaced persons, refugees, and migrant workers.