JES training programme to build on prior work done

Over Fifty officers will benefit from a one-week training programme launched on Monday, September 18, 2017. The programme will be conducted by the Canadian Justice Education Society (JES) and will be held at the Guyana Police Force Officer’s Training Centre. The collaborative effort between JES and the U.S. Department of State’s Bureau of International Narcotics and Law Enforcement Affairs (INL) is part of the ‘Strengthening the Criminal Justice in Guyana’ project. 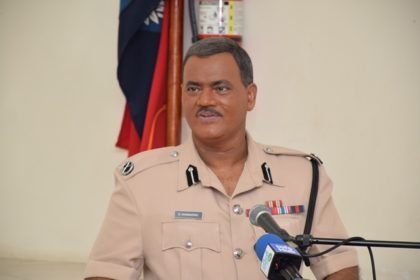 The officers are expected to participate in major case management, train-the-trainers, and coaching sessions, which will equip them with the tools to track and improve each step of the investigative process, the knowledge and skills to deliver the course without outside assistance (a key to the sustainability of the programme) and improved note-taking and report writing skills respectively.

Amy Knaup, United States Embassy representative explained that the project focuses on enhancing the broad knowledge and skills of the Guyana Police Force (GPF) in various techniques while also concentrating on more specific skills identified through consultations with stakeholders. She noted that the training programmes are built on the work that has already been completed in prior workshops undertaken by JES.

“These courses have been developed to provide a structure for major case investigations the activities that you (participants) will engage in for this week will enhance your ability to conduct major crime investigations and will directly contribute to the larger projects objectives of strengthening the criminal justice system (in Guyana)”, Knaup noted.

It was highlighted that between 2012 and early 2014, agencies of the United States Government including the INL completed a series of assessment reports. These reports identified the challenges that exist in the justice system of Guyana, extending from the police investigative procedures through the criminal prosecution process. 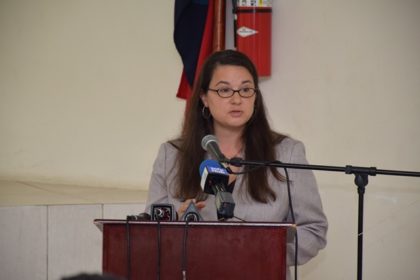 Acknowledging there is a lack of professionalism among Guyana Police Force (GPF) officers, Acting Commissioner David Ramnaraine said this is being reflected not only locally but internationally, as an area which needs to be addressed if the force is to be developed.

“Increasingly people are concerned local, regional and international, they are concern, authorities are concerned, wanting to assist in that regard in the development of a professional police force, a police force where the officers who are charged with this honourous duty understand, appreciate and are equipped with the skills and knowledge to provide a qualitative service to the communities.”

While commending their participation, Ramnaraine urged the officers to utilise the training in the performance of their duties.

In January of 2015, the Embassy and the Diplomatic Community combined efforts to identify and address issues within the Justice Sector.  Representatives from Guyana’s policing, prosecuting and judicial authorities conducted a series of meetings and seminars to ascertain the expertise and methodology to develop a structured justice reform program for Guyana.

To date, the program has seen over 500 persons benefiting.