Consultations began on March 11, with leaders of Kato and the surrounding communities in Region 8, in preparation for Guyana’s countrywide Golden Jubilee celebration as a Republic.

Leading the team was Minister of Social Cohesion, with responsibility for Culture, Youth and Sport, Dr. George Norton.

The consultations surrounded planning for the monumental occasion come 2020 for which the Potaro-Siparuni Region has been allocated $35M. The objective was to ascertain from the leaders, what they would need to make the event possible. The engagement was a fruitful one as the leaders were not shy in making recommendations and suggestions on how best they can pull off the celebrations. 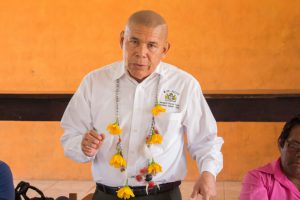 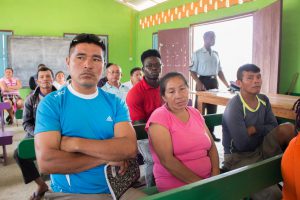 Leaders of Region 8 during the consultations

Addressing the leaders, Minister Norton said the celebration will be for the residents of Region 8 noting that all must be integrally involved.

“It should be done in such a way that the community is involved.  We do not ever want to come and say that you must have this. We want to be able to defend the project by saying, it is the people of Kato who wanted this” the minister stated.

He further noted that whatever is decided upon, there must be employment stemming from the project for residents of the region. Minister Norton underscored that this is a measure the Coalition Government has been enforcing throughout the country, especially in the hinterland communities.

Head of Administration, Nicholas Fraser outlined what is expected of the leaders and how they can get involved. However, Fraser noted that whatever is decided upon, must be accompanied by a plaque and a flag pole.

The total sum of $350M was allocated in the 2019 National Budget for the ten administrative regions to sufficiently prepare for the Golden Jubilee observances in 2020. This will see respective regions receiving $35M. The preparation largely entails the rehabilitation and upgrading of venues for the hosting of national and regional events, along with the construction of commemorative landmarks across the country.